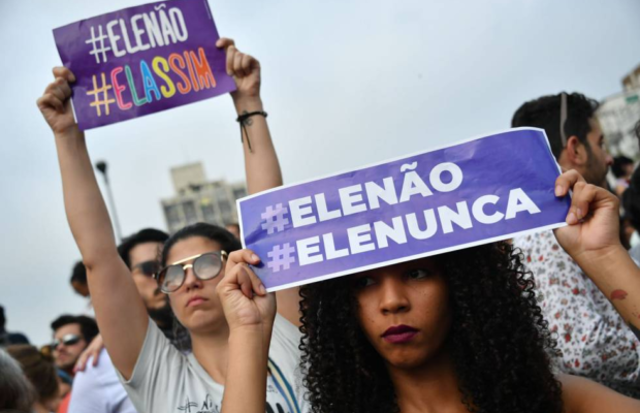 The most feared, but foreseeable at the same time, has already happened. Jair Bolsonaro almost won the presidency of Brazil in the first round and thanks to the consequent vote of the poor people of the Northeast, he has to go to a second round.

I emphasize the word “consequent” since there was an abundance of peripheral neighborhoods in the great cities and towns of different States, that in this so called “democracy”, supported the Latin American Hitler. These neighborhoods not only experience the most exploited people of Brazil but also an ample amount are from afro-descendant sectors.

There are multiple aspects and causes that have influenced the conformation of this scenario, which despite not being definitive (it cannot be definitive until the votes of the second round are counted on  October 28), forces us to turn on all possible red warning lights.

In the first place, as is happening in other countries of the continent and the Third World, the main reason continues to be this sickly attachment to sustaining bourgeois “democracies” that only serve to ambush and push back any possibility of constructing a liberating alternative. These false options with which we do not eat, do not educate, do not cure and even less do we grow in a framework of a certain dignity for our peoples, are the fundamental restriction to “entertain” us in the best of cases, and divide us from the left, in order to domesticate us from the right.

How many more times are we going to test the formula imposed on us by this system that slowly resembles the oppressive dynasties of the Middle Ages? It is precisely in this framework that the most declaredly fascist exponents, in the style of Jair Bolsonaro or Donald Trump, emerge first as peripheral players and then they become institutionalized little by little. There are also the likes of Macri or Piñera who are not left behind in the methods they apply, even if they try to disguise their extreme right views.

They launch into speeches where they replace the word “change” with “order”, and thus very easily convince important sectors of the population who believe that the problems of insecurity are solved with more police or by expelling immigrants. Many of them believe that in order to keep themselves pure and unpolluted it is necessary to hunt (first in words, and then in deeds, as it happened with Rio councilwoman Marielle Franco) for sexual dissidences, Afro-Brazilian men and women, or anyone who does not comply with their practices which have a clear patriarchal root. That is why popular feminism, which opposes them and denounces them in the streets, is also the target of their hatred.

Obviously, in order for this ideological poisoning operation to have greater success, the majority of those who commune with authoritarian practices have been simmered in the preaching of the hegemonic media.

Thus, characters like Bolsonaro, who when they burst on the scene are almost underestimated by the left, don’t have hair on their tongue to express any kind of threatening proposals, and to be received with fanatical acceptance by their followers. I emphasize, not all of Bolsonaro’s audience are white, upper-middle-class men.

In this way, the first link in the construction of fascism emerges in a social body that is sick and conveniently disillusioned by “politics”. In reality, it is no different from what happened in pre-Hitler Germany or pre-Mussolini Italy, and we already know how that story ended.

It is also necessary to understand that Bolsonaros, Macris and other similar ones are pieces of a plan of continental recolonization promoted by U.S. imperialism, which no longer aspires to keep a “backyard” but wants to exploit the whole building and the wealth it contains.

The other great factor that makes these rapid ascents of the extreme right possible are the errors (or horrors) that were committed in by the progressive left itself. In the special case of Brazil, it is obligatory to name the Workers’ Party, which governed for so many years and which, although it opened up a wide range of freedoms and imposed important social changes (many of them of a purely welfare nature), did not want to break the mold of capitalism, and gradually abandoned the original idea (with which Lula himself originally shook the metalworkers) of the option for socialism, remaining stuck only in “progressivism”.

Here comes another substantial issue and it is a matter of understanding that this ideological matrix has very concrete limits, and in order to arrive at and then sustain itself in a government, it generates alliances that then cost it its life, euphemistically speaking. It is not the same to aspire to a progressive practice as to have a strong aspiration to follow a revolutionary course. In this sense, it is no coincidence that the vast map of governments with popular characteristics that until recently remained standing on the continent, only Cuba (as always, an indispensable lighthouse), Bolivarian Venezuela and the plurinational Bolivia of Evo Morales are still standing.

The third factor to take into account in the difficult Brazilian situation is that beyond the effort and sacrifice assumed in the streets throughout the country by some of the most important social movements such as the Landless and the Homeless, both aligned on fronts that vindicate the popular and socialist left, the mobilization of the masses did not rise to the occasion in all these months, and especially since Lula’s unjust detention. This fact, the imprisonment of a popular leader and the former president who offered the most possibilities to the most humble, should have triggered an important social revolt, with hundreds of thousands of people on the streets.

This did not happen, and in this aspect weighs again the mistaken idea that all problems are solved with “democracy” and the ballot boxes it offers as an instrument, when it is in the street struggle where the people have historically achieved their highest conquests. This was well understood by the militants of the MST and their leaderships, when in addition to constantly mobilizing and even maintaining almost alone the camp in front of the prison where Lula was detained, they launched a message for the future, pointing out that if the left represented by Haddad-Lula wins the elections, the government that would result from it should abandon any hint of “class conciliation” and undertake profound changes, in a radical turn toward the left and socialism.

Now, let’s agree that the scenario that has been opened this past Sunday is of extreme gravity, and that what happens on October 28 will not only affect Brazil but the entire Latin American region. In this sense, knowing that the game will have to be played again in the enemy’s field, it is indispensable to find the mechanisms to make an enormous effort to stop the rise of fascism represented by Bolsonaro. On the one hand, the unity of all the left and the popular camp must be imposed, which, abandoning on this occasion the “politically correct” language and any hint of “goodism” that usually surrounds some sectors, must express themselves and act radically.

It is indispensable to generate confidence that if Fernando Haddad wins (which is not impossible at all), they will finally realize and fulfill all the demands that the popular movement has been voicing for years, and that go through agrarian reform, nationalization of foreign trade, ending the dictatorship of the “big media” and other demands of a revolutionary character. Because fascism is not defeated with speeches or moderate practices but with all the force imposed by the circumstances of being between life and death. This is important to take into account when making a campaign of just a few days where all the factual powers will have to be confronted, from the governmental-business and ecclesiastical apparatus (above all the evangelical Pentecostal) to the brainless barrage of the mass media.

The differentiated discourse between one candidate and another should not be simply an expression of language, but rather an attempt to convince that, as on other occasions in history, the choice is “socialism or barbarism”. And that if the latter triumphs, those who will be harmed, as always, will be the humble and not a few sectors of the Brazilian middle class. The challenge is now posed, the slogan is as well-known as necessary: “They shall not pass”.

The CIA finger in Brasil’s Elections