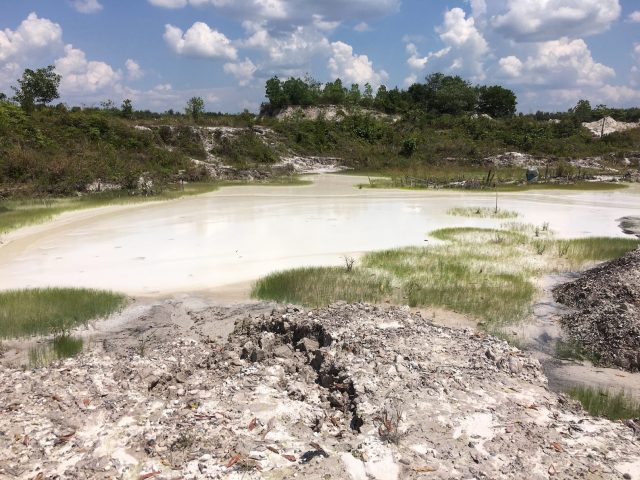 Andre Vltchek reports once more on the devastation in Borneo, the largest island in Asia, as a direct consequence of capitalism in its savage neo-colonial shape in Indonesia. Vltchek is also working on producing a documentary to expose this.

She was just standing there, in the middle of burning land, surrounded by stumps of trees, fire everywhere, smoke rising towards hopelessly gray sky. The expression on her face was mischievous, almost girlish. I had no idea how old she was: she could have been 28, just as she could easily have been 55.

This island, this village, this charred land: it all looked like hell to me, but obviously not to her: it actually made her laugh, burst with pride.

After all, it was her island, not mine; it was her land, her trees, and it was all getting royally fucked. She was personally participating in this carnage of nature – she, as well as her husband, her entire family, her neighbors.

Her name was Bu Elvi. ‘Bu’ means mom, or mam or Misses, in Bahasa Indonesia. Her scorched land spans near the village of Dusun Terusan, and Dusan Terusan is near Sintang, in the heart of Borneo, on the largest island in Asia, which is also the second largest island in the world, on what we habitually call ‘our Planet Earth’; although frankly, this moonscape of Indonesian Borneo/Kalimantan has very little to do with what used to be the ‘blue planet’.

“I know that prices of rubber went down at least three times, lately. Now we will burn all this down, since the government refuses to give us any substantial compensation… and then, we will plant some vegetables, at least for a while.”

“Then, well…” she hesitates, but for just a few moments. Regaining her bearings, she declares, defiantly:

“If that happens, we will burn the vegetables and reintroduce the rubber plantation.” 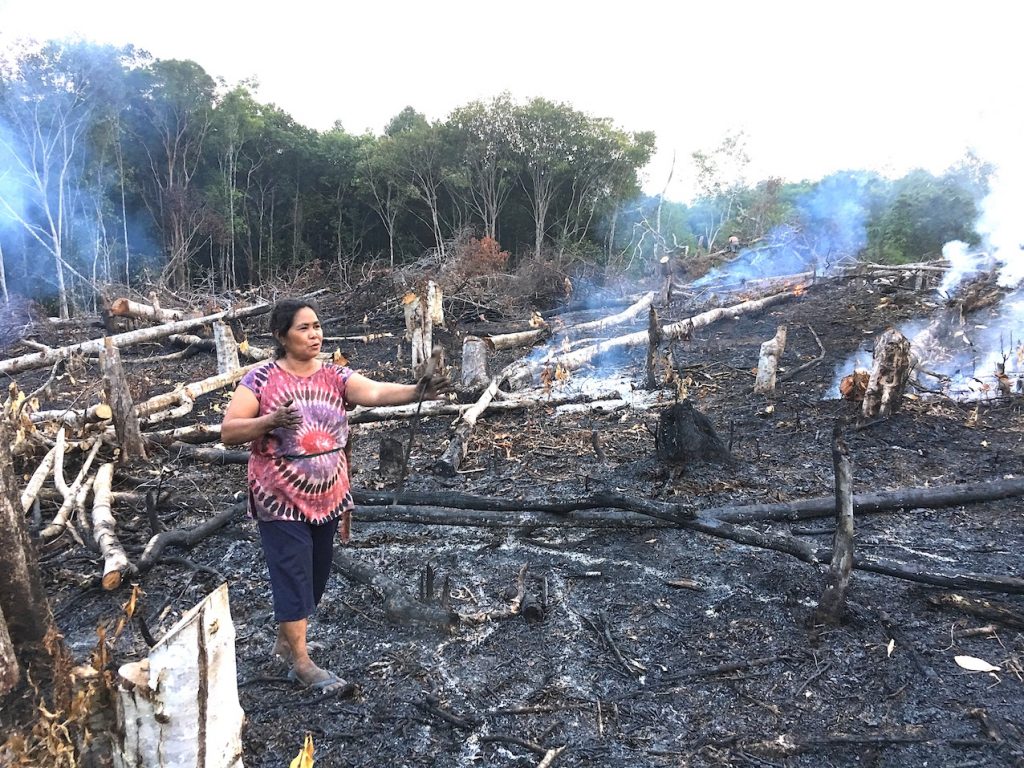 Now it is all black around her. It is desperate and depressing. But she doesn’t look suicidal, miserable, or even guilty. She does precisely what she was told to do under General Suharto’s military dictatorship, which was sponsored by the United States and the rest of the West. She does what she was taught to do right after the dictatorship collapsed (at least on paper) – in the present era of savage capitalism and unbridled thieving, which has also been clearly supported from abroad. She is making money. She is simply producing dough. She does not rely on anybody, she is well aware of the bottom line: nobody will give her anything. Even if she were starving to death, she would get nothing. And so she opts to be ‘independent’, as well as strong, aggressive, arrogant and observed from some distance, mildly insane.

She is of course religious, as everyone in this country is forced to be from his or her childhood. Most likely, she doesn’t give a damn about this life, as there is, she believes, something much better, ‘somewhere else and big’, right after this suffering on Earth.

She is a tough woman, a ‘survival of the fittest’ kind of person, in short a ‘new Indonesian’.

Can one blame her? Perhaps yes. Perhaps no. She has to live, to survive in this inhuman, savage system, designed and injected from somewhere, from far away.

Still, the land is burning. Here and all around Sintang, all around Borneo, and in all corners of this entire Indonesian archipelago.

Would she opt for the independence of her island, if such an option were to be available?

She doesn’t need to think; she is suddenly absolutely certain. She clenches her right fist, grinning at us: “Merdeka! Independence!”

I am wondering whether it matters, whether it matters at all, who is ruling over this island. Fascism, savage capitalism, as well as the collaboration with foreign powers and institutions, has created a monoculture in this once great archipelago whose motto stated proudly: ‘Unity in Diversity’.

If there is merdeka, and if Bu Elvi rules, would the land stop burning? 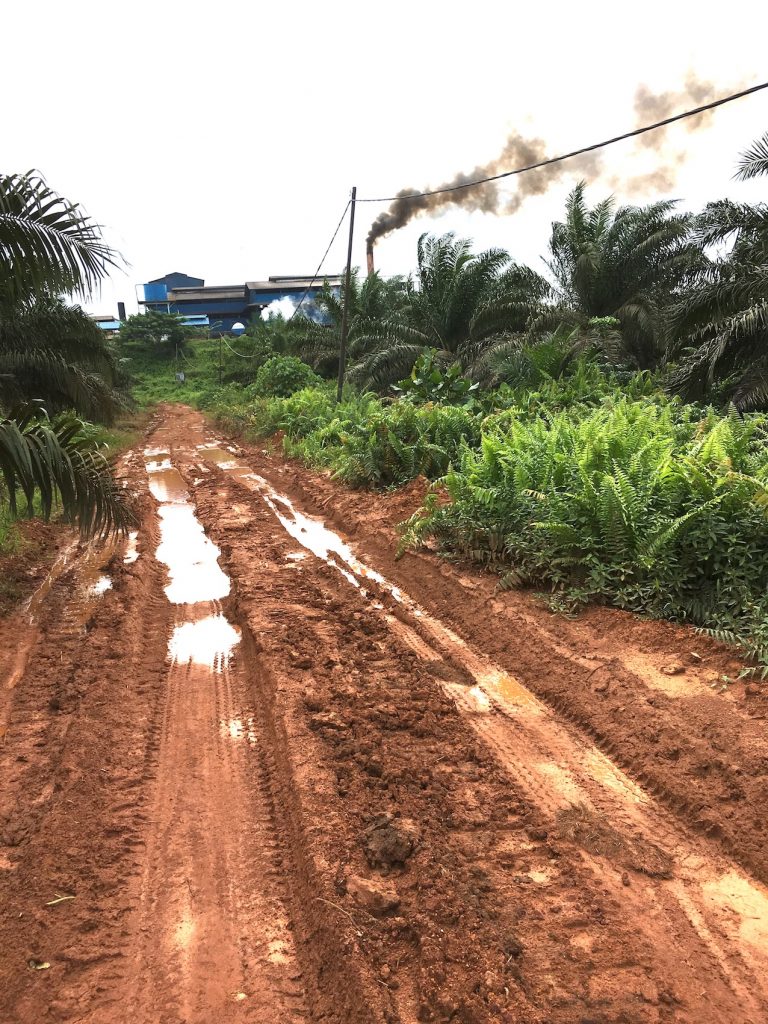 I spoke to a woman near the city of Samarinda, in Eastern Kalimantan. She was selling some fruits and crackers in a small store, predominantly serving workers from the immense plantations located literally behind her back. No primary forest was left anywhere in the vicinity. Everything in the area was black, or green, but if green it is covered by sawit, the Indonesian word for palm oil.

Her business was so-so, she said, nothing spectacular. Frankly, she was hardly making ends meet, and she had no health insurance, no housing subsidies, and no financial support from the government. Despite all this, she appeared to be content. Or at least she said that she was:

“We don’t have any fires around here, anymore. Before, when there was still some tropical forest left, there were constant fires. Now it is all quiet.”

“Isn’t it because the palm oil companies and mining multi-nationals finally got what they always wanted?” I wondered. “Now they do what they desire. They cut down everything. Why would anyone burn things now? Forest is gone… Island is totally ruined. Palm oil, open mines and rubber plantations are covering almost entire surface of it…”

She stares at me, blankly. She does not understand what am I talking about, at what am I hinting at. She is confused. No one speaks like this, here. No one thinks this way. No one thinks, anymore, full stop…

“I used to come here every weekend,” whispers Ms Mira Lubis, a professor at Tanjungpura University in Pontianak city:

“It used to be so serene, so beautiful. This beach… My beach… My father was a doctor. He worked very hard. When he got tired, he took us all here, an entire family. I used to play in the pristine sand, with my brothers… I used to swim here. Now just look around…”

She shows me her childhood photos. I can see ‘her beach’, as it used to be, decades ago. I can see it now. She has tears in her eyes.

I look around. And it is all ruined: someone poured concrete over the sand: terrible job, thoroughly amateurish. Ugly stalls are everywhere, like sores. The sand area was reduced to just a couple of meters. Some huts and ugly, crumbling structures double as a ‘seaside hotel’.

The beach appears to be totally abandoned and forgotten. The only thing that is never forgotten in Indonesia is an entrance fee; charging random visitors for entering anything, even this devastated place. In this country, nothing is public, nothing is free, and nothing is for the people. Even destruction is promoted as an attraction, as a ‘tourist destination’. You stop your car near the emergency room of a hospital: you have to pay… You enter a disaster area, a place ruined by a mining company somewhere in East Java: you are forced to pay. Scarred nature, ruined land quickly becomes a sightseeing attraction! You essentially pay for everything in Indonesia, especially if you are dirt poor. 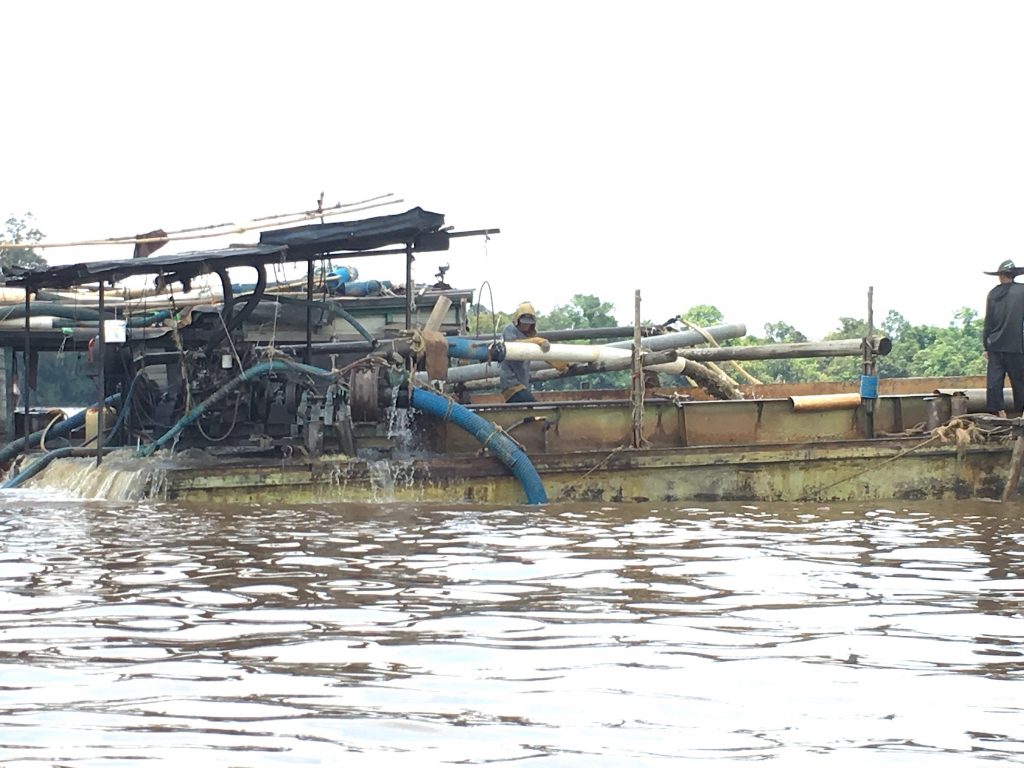 Mira is walking slowly along ‘her beach’. She is deep in thoughts; she looks devastated. Her calm childhood memories are now confronted by reality, which appears to be simply monstrous. Her green island inhabited by ancient cultures and thousands of species of animals, birds and plants, now resembles a computer-generated image from a second-rate horror film.

She specializes in water communities, but the water is poisoned, mighty waterways polluted.

Far away, there is a brilliant, purple-red sunset covering the entire horizon. The sun is setting down behind a cluster of offshore islands. It is a brilliant, stunning sight. Borneo used to be one of the most beautiful places on Earth. But now, only contours are left; contours, memories and bitterness.

Again, I work; we work – filming, photographing and talking to local people. I don’t need any data. There is no need for theories. This is all clear, raw, absolutely undisputable.

Everything can be ‘explained’ and ‘neutralized’ by complex and ‘scientific’ theories, by going round in circles, by blurring the reality. Indonesian ‘science’ and academia, after 1965, has produced nothing useful for the country and for humanity, but they do one thing well: ‘muddying the water’, confusing and complicating things, making sure that what is obvious from the first sight, is squarely disputed, denied. Hundreds, perhaps thousands of PhD’s are made this way and for this very purpose, annually. 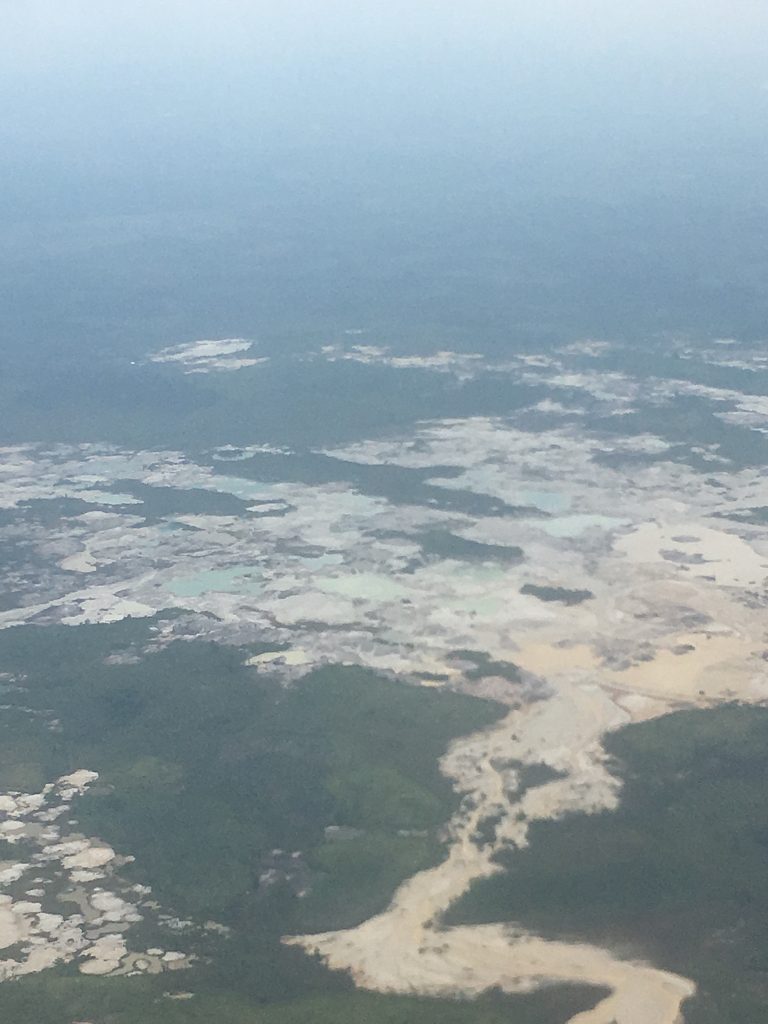 And the island is burning. Filthy chemical streams are everywhere. There is “illegal” gold mining on the land and in the middle of the mighty but horrendously polluted rivers of Borneo; mining is visible from the air and surface, but controlled by ‘influential individuals’, even by armed forces, and therefore untouchable.

Borneo is now synonymous with mining and logging, as well as with terrible plantations that have already cannibalized most of the land. Nothing is being produced, but everything has been extracted.

People are losing their land. They are losing health, even lives. The world is losing its ‘lungs’ – the tropical forests – or more precisely, it has already lost them all around this unfortunate archipelago.

Savage capitalism, moral and financial corruption, multi-national companies on the loose; this is a sad, even horrifying reality of the country, which totally lost its bearing.

Borneo, it appears, is nearing the end. The entire Indonesia is nearing the endgame, but it is considered ‘politically incorrect’ to mention it in the West, particularly in the mainstream media. Indonesia is, after all, ruining itself, so the West can prosper. It was like that during colonialism, and it has been like that, again, ever since the US-sponsored military coup of 1965.

I work feverishly in Borneo: I film, I write and photograph. Others are standing by me, trying to help. Are we going to achieve anything? I hope we will; we have to, otherwise, soon, here and elsewhere, everything will be finished, privatized, commercialized and eventually destroyed.

I also work in Afghanistan, in the Middle East and in several fully ruined countries of Africa. Everything here, in Borneo, appears to be extremely familiar. Is it really peace that is reigning here? I’m highly doubtful. To me it looks like a war, like an extremely brutal war. It looks like the war of people against their own people, the war of people against nature, against all living beings and species; a war against the forests and river, and even against life itself.

It looks like a neo-colonialist nightmare. It once used to be the most beautiful place in Asia, now it is scarred, charred and in terrible pain. But it is still breathing; it is alive. And what is alive is always worth fighting for.