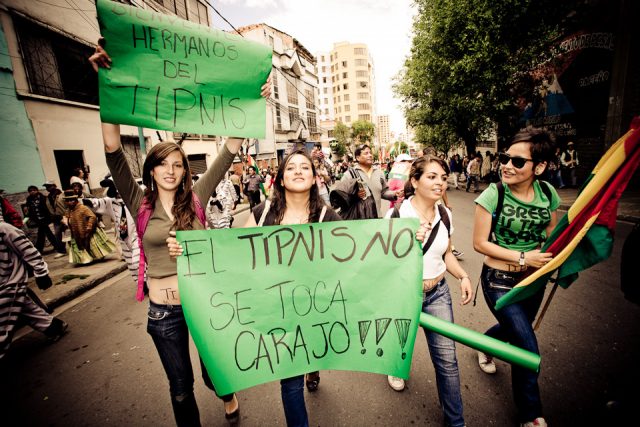 As has become a standard operating procedure, an array of Western environmental NGOs, advocates of indigenous rights and liberal-left alternative media cover up the US role in attempts to overturn the anti-imperialist and anti-neoliberal governments of Rafael Correa in Ecuador and Evo Morales in Bolivia.

This NACLA article is a recent excellent example of many. Bolivia’s TIPNIS (Territorio Indígena y Parque Nacional Isiboro Secure) dispute arose over the Evo Morales government’s project to complete a road through the park, opposed by some indigenous and environmental groups.

As is NACLA modus operandi, the article says not one word about US and rightwing funding and coordination with the indigenous and environmental groups behind the TIPNIS anti-highway protests. (This does not delegitimize the protests, but it does deliberately mislead people about the issues involved).

In doing so, these kinds of articles cover up US interventionist regime change plans, be that their intention or not.

NACLA is not alone in what is in fact apologetics for US interventionism. Include the GuardianUpsideDownWorld, Amazon Watch, so-called “Marxist” Jeffery Webber (and here), Jacobin, ROAR, Intercontinentalcry, Avaaz, In These Times, in a short list of examples. We can add to this simply by picking up any articles about the protests in Bolivia’s TIPNIS (or oil drilling in Ecuador’s Yasuní during Rafael Correa’s presidency) and see what they say about US funding of protests, if they even mention it.

This is not simply an oversight, it is a cover-up.

What this Liberal Left Media Covers Up

On the issue of the TIPNIS highway, we find on numerous liberal-left alternative media and environmental websites claiming to defend the indigenous concealing that:

1. The leading indigenous group of the TIPNIS 2011-2012 protests was being funded by USAID. The Confederation of Indigenous Peoples of the Bolivian East (CIDOB) had no qualms about working with USAID — it boasted on its website that it received training programs from USAID. CIDOB president Adolfo Chavez, thanked the “information and training acquired via different programs financed by external collaborators, in this case USAID”.

2. The 2011 TIPNIS march was coordinated with the US Embassy, specifically Eliseo Abelo. His phone conversations with the march leaders – some even made right before the march set out — were intercepted by the Bolivian counter-espionage agency and made public.

3. “The TIPNIS marchers were openly supported by right wing Santa Cruz agrobusiness interests and their main political representatives, the Santa Cruz governorship and Santa Cruz Civic Committee.” In June 2011 indigenous deputies and right wing parties in the Santa Cruz departmental council formed an alliance against the MAS (Movement for Socialism, Evo Morales’s party). CIDOB then received a $3.5 million grant by the governorship for development projects in its communities.

4. Over a year after the TIPNIS protests, one of the protest leaders announced he was joining a rightwing anti-Evo Morales political party.

5. The protest leaders of the TIPNIS march supported REDD (Reduce Emissions from Deforestation and Degradation). The Avaaz petition (below) criticizing Evo Morales for his claimed anti-environmental actions also covered this up. As far back as 2009 “CIDOB leaders were participating there in a USAID-promoted workshop to talk up the imperialist-sponsored REDD project they were pursuing together with USAID-funded NGOs.”

REDD was a Western “environmental” program seeking to privatize forests by converting them into “carbon offsets” that allow Western corporations to continue polluting. That REDD would give Western NGOs and these indigenous groups funds for monitoring forests in their areas.

6. These liberal-left alternative media and environmental NGOs falsely presented the TIPNIS conflict as one between indigenous/environmentalist groups against the Evo Morales government. (e.g. the TIPNIS highway was “a project universally[!] condemned by local indigenous tribes and urban populations alike”) Fred Fuentes pointed out that more than 350 Bolivian organizations, including indigenous organizations and communities, even within TIPNIS, supported the proposed highway.

CONISUR (Consejo de Indígenas del Sur), consisting of a number of indigenous and peasant communities within TIPNIS, backed by Bolivia’s three largest national indigenous campesino organizations, organized a march to support of the road. They argued that the highway is essential to integrating Bolivia’s Amazonia with the rest of the country, as well as providing local communities with access to basic services and markets.

The overwhelming majority of people in the West who know about the TIPNIS protests, or the Yasuni protests in Ecuador, where a similar division between indigenous groups took place, never learned either from the liberal-left media or the corporate media, that indigenous groups marched in support of the highway or in support of oil drilling.

Therefore, this liberal-left media is not actually defending “the indigenous.” They are choosing sides within indigenous ranks, choosing the side that is funded and influenced by the US government.

7. The TIPNIS conflict is falsely presented as Evo Morales wanting to build a highway through the TIPNIS wilderness (“cutting it in half” as they dramatically claim). There are in fact two roads that exist there now, which will be paved and connected to each other. Nor was it wilderness: 20,000 settlers lived there by 2010. (1)

9. They often fail to note that the TIPNIS marchers, when they reached La Paz, sought to instigate violence, demanding Evo Morales removal. Their plot was blocked by mobilization of local indigenous supporters of Evo’s government.

If we do not read Fred Fuentes in Green Left Weekly, we don’t find most of this information. Now, it is true that some of the media articles did mention that there were also TIPNIS protests and marches demanding the highway be built. Some do mention USAID, but phrase it as “Evo Morales claimed that those protesting his highway received USAID funding.”

The TIPNIS campaign, which became a tool in the US regime change strategy, was taken up in a petition by Avaaz. It included 61 signing groups. Only two from Bolivia! US signers included Amazon Watch, Biofuelwatch, Democracy Center, Food and Water Watch, Global Exchange, NACLA, Rainforest Action Network. Whether they knew it, whether they wanted to know it, they signed on to a false account of the TIPNIS conflict, placed the blame on the Bolivian government, target of US regime change, and hid the role of the US.

US collaborators in Bolivia and Ecuador are painted as defenders of free expression, defenders of nature, defenders of the indigenous. The US government’s “talking points” against the progressive ALBA bloc countries have worked their way into liberal-left alternative media, which echo the attacks on these governments by organizations there receiving US funds. That does not mean Amazon Watch, Upside Down World or NACLA are themselves funded by the US government – if it somehow exculpates them that they do this work for free. Even worse, much of this propaganda against Evo and Correa appears only in the liberal-left alternative press, what we consider our press.

The USAID budget for Latin America is said to be $750 million, but estimates show that the funding may total twice that. Maria Augusta Calle of Ecuador’s National Assembly, said in 2015 the US Congress allocated $2 billion to destabilize targeted Latin American countries.

This information, how much money it is, what organizations in the different countries receive it, how it is spent, ought to be a central focus of any liberal-left alternative media purporting to stand up for the oppressed peoples of the Americas.

Yet, as Fuentes points out: “Overwhelmingly, solidarity activists uncritically supported the anti-highway march. Many argued that only social movements — not governments — can guarantee the success of [Bolivia’s] process of change…. with most articles written by solidarity activists, they] downplay the role of United States imperialism…. Others went further, denying any connection between the protesters and US imperialism.”

Why do they let themselves become conveyor belts for US regime change propaganda?

Why did this liberal-left media and NGOs let themselves become conveyor belts for US propaganda for regime change, legitimizing this US campaign to smear the Evo Morales government?

Some of it lies in the liberalish refusal to admit that all international issues can only be understood in the context of the role and the actions of the US Empire. As if conflicts related to countries the US deems hostile to its interests can be understood without taking the US role into account. Some liberal-left writers and groups do understand this, just as they do understand they may risk their positions and funding by looking to closely into it.

It seems easier to not see the role the Empire plays and simply present a liberal-left “critique” of the pluses and minuses of some progressive government targeted by the US. That is how these alternative media sources end up actually advocating for indigenous groups and environmental NGOs which are US and corporate funded. They even criticize countries for defending national sovereignty by shutting down these non-governmental organizations, what Bolivian Vice-President Linera exposes as “foreign government financed organizations” operating in their countries.

Some of it lies in the widely held anti-authoritarian feeling in the US that social movements “from below” are inherently good and that the government/the state is inherently bad. The reporting can be informative on social movements in Honduras, Guatemala, Mexico, Colombia where the people struggle against state repression. But when these social movements in Ecuador or Bolivia were able to win elections and gain hold of some real state power, reporting soon becomes hostile and misleading. “Support social movements when they struggle against governmental power; oppose them once they win government power,” they seem to say. Their reporting slides into disinformation, undermining our solidarity with other struggles, and covering up US regime change efforts. UpsideDownWorld is an excellent example of this.

Some of it lies in what many who call themselves “left” still have not come to terms with: their own arrogant white attitude they share with Western colonizers and present day ruling elites: we know better than you what is good for you, we are the best interpreters and defenders of your socialism, your democracy, your human rights. They repeatedly critique real or imagined failures of progressive Third World governments – targets of the US.

Genuine solidarity with the peoples of the Third World means basing yourself in opposition to the Empire’s interference and exposing how it attempts to undermine movements seeking to break free from the Western domination.

Some of it lies in deep-rooted white racist paternalism in their romanticizing the indigenous as some “noble savage” living at one with nature in some Garden of Eden. Providing these people with schools, health clinics, modern conveniences we have, is somehow felt not to be in their best interests.

A serious analysis of a Third World country must begin with the role the West has played. To not point out imperialism’s historic and continuing exploitative role is simply dishonest, it is apologetics, it shows a basic lack of human feeling for the peoples of the Third World.

A function of corporate media is to conceal Western pillaging of Third World countries, to cheerlead efforts to restore neocolonial-neoliberal governments to power. However, for liberal-left media and organizations to do likewise, even if halfway, is nothing other than supporting imperialist interference.

Why Such Hate Against Rafael Correa?