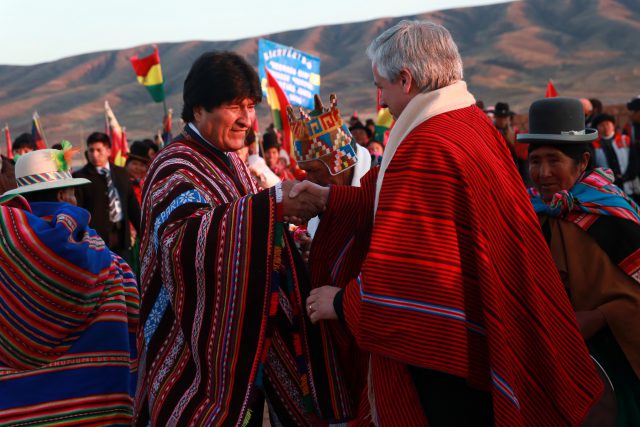 Over the past decade, Bolivia has managed some extraordinary achievements, for instance becoming the first country in the world to reach the UN Sustainable Development Goals in terms of access to water. In spite of it, these news that could bring hope to people around the world are subjected to censorship from the dominant Latin American and western media. More than that, the media proceeds to relentlessly misinform and demonize all the leaders from the Global South that dare disobey the empire. The Journal of Our America has interviewed Claudia Espinoza, former vice-minister of Communication Policy from the Plurinational State of Bolivia, to ask her how the peoples can defend their right to access information, a basic pillar in the emancipation of democratic societies.

What balance do you make in what concerns the communication policies during your time in office, between 2012 and 2016?

When I took office as vice-minister for Communication Policies, the state was lacking communication policies that could contribute to educate and train the populations. It was also known that the economic resources destined to communications were being handed to a few media conglomerates. On the other hand, there was a lack of modernizing in our communications, a severe technological gap.

During our term, together with Communication Minister Amanda Dávila, we made progress on these three fronts: creating communication policies such as the democratization of government publicity, reaching more than 600 newspapers, journalists, online media, among others; we created a monitor for media outlets to ensure that laws that protect human rights were being respected, we also carried out educational campaigns and we sanctioned the outlets that did not follow these rules.

In the Ministry of Communication we also modernized the use of new information and communication technologies (ICT), enabling many media outlets and social sectors through their use.

The predominant culture often reproduces eurocentric prejudices and thought patterns. One of its consequences is this culture of trivializing violence, in particular violence against women. To combat this, how important are the campaigns to raise awareness and to spread information to the public, in your opinion?

They are crucial. Violence has a structural and historical character, so countries such as the Plurinational State of Bolivia have the duty of constantly carrying out systematic campaigns, in accordance with the Constitution and the laws that are in place. This means making use of all forms of communication (including ICTs), respecting the traditional languages, as well as developing communicational processes on a more personal level.

Contrasting to the previous era, before Evo Morales’ government, how would characterize the current situation in terms of national communications and cultural decolonisation? And what challenges lie ahead?

Communications under neoliberalism had a purely commercial character. The state shied away from all responsibilities in what concerned communications with society, their importance and impact.

With Evo Morales we made historic, remarkable strides, starting from the recognition of the access to communication and information as a fundamental right in our Constitution and in other laws that regulate and sanction how media outlets operate.

There is still the need to revise some norms and adjust regulations, these are necessary in order to keep moving forward in terms of cultural decolonisation. This is a long and treacherous road, we are only 11 years into it.

Recently we have witnessed how important leftist leaders in Latin America, such as Cristina Kirchner, Lula da Silva or Dilma Rousseff have been the target of strong media campaigns, directed by large media conglomerates (Clarín, Globo,…). President Evo Morales has also been subjected to this kind of smearing attacks. What can you tell us about this?

The opposition, both internal and foreign, has articulated and applied several different strategies to smear and discredit President Evo Morales, and these fit into what we can call “Fourth Generation Warfare”, in that it is executed through media outlets and social media.

They have explored the trail of racism and discrimination to affect his credibility. But in what concerns public governance, there isn’t a single accusation against him with a leg to stand on.

What other examples would you highlight? How has the MAS (Movimiento al Socialismo) government faced these attacks?

The most symbolic cases have been the Indigenous Fund (Fondo Indígena, whose resources are destined for social movements. There are ongoing trials against figures suspected of misappropriating public funds) and the Zapata case (story of a woman who lied about having a son with the President).

Apart from publicly denouncing the relevant journalists and outlets that have been lying, the government started legal proceedings that ended up justly proving that the President was correct.

How would you reply to Emmanuel Colombié, chief of the Latin American bureau of “Reporters without Borders”, who said: “journalists (in Bolivia) are facing a strong and determined state, that tries to shutdown any dissenting voices. So the main threat against freedom of the press is the state”?

On multiple occasions it has been proven that there are no restrictions on freedom of speech in Bolivia. First of all because it is guaranteed by the Constitution. And secondly, the cases of defamation, insults, manipulation, that can be found every day in the media, have not been in any way censored. No newspaper has been shutdown during Evo Morales’ tenure, no journalist has ever been arrested.

How important is it for the MAS government to develop a counter-hegemonic communication model, through community or popular media outlets?

It is of crucial importance, because in practice the MAS was borne out of these community and popular media outlets. In the beginning of his tenure, Evo Morales supported community radio stations and social movements so that they would enjoy their right to communications. The Tupac Katari satellite was a response to the priority of bringing technology to the rural areas, where there is now access to television and internet through satellite.

In your opinion, what do the attacks against TeleSur by the Latin American right-wing mean?

It is part of the imperial strategy of silencing the voice of the peoples. TeleSur plays a fundamental role in the media world, being in effect the only source that shows the other side of the reality in Latin America, and showing the rest of the world, the other continents, to Latin America.

How can Latin American peoples reinforce this regional integration mechanism?

Wherever there are progressive governments in power, it is necessary to institutionalize TeleSur as a democratic right of the peoples. To reinforce this mechanism the peoples themselves need to participate further, multiplying its reach through social media and following its broadcast permanently.

Translated from Spanish by Ricardo Vaz