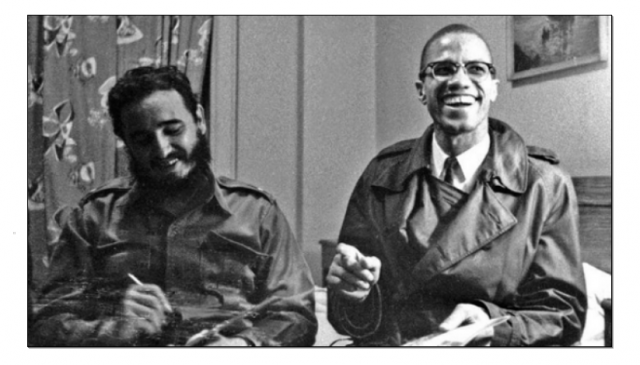 For many of us in “Black America”, Fidel represented the audacity that we have desired and sought in the face of imperial and racial arrogance.

It is impossible to discuss Fidel Castro outside of an examination of the Cuban Revolution. And, while I hear that there are many Cuban Americans dancing with glee upon news of the death of President Castro, I know that the emotions within Black America are and will continue to be quite different.

For any Black person in the U.S. who knows anything about the history of the Western Hemisphere, both Cuba and Haiti have a special significance. Haiti, of course, for successfully ousting the French in 1803 and forming the second republic in the Americas; a Black republic. Cuba, in 1959, kicked out the United States, the Mafia, and a corrupt ruling class that had enforced racist oppression against most of the Cuban population. In the cases of Haiti and Cuba, their audacity in the face of a racist imperialism brought forth the wrath of their opponents.  How dare the Cubans stand up to the U.S.? How could a country of all of these “brown” and “black” people insist that they should determine their own destinies?

Thus, Fidel Castro immediately had a special significance for countless Blacks in the U.S.. When I was quite young I remember my father telling me how his brother-in-law, a professor at Johnson C. Smith University, had sat watching the television as pictures were shown of Cuban exiles entering the U.S. after the 1959 Revolution. His comment to my father was that all that he saw were white-looking Cubans stepping off the planes or boats. No brown and black Cubans. This told him something about the nature of the Cuban Revolution and its leader, Fidel Castro.

Fidel further endeared himself to much of Black America when he visited the U.S. and took up residence in the Hotel Theresa in New York’s Harlem. It was there that he met another icon, Malcolm X. It was situating himself in the Black community that shook much of the U.S. establishment and told Black America that something very unusual was unfolding 90 miles off the coast of Florida.

In the weeks, months and years to come there will be exhaustive examinations of the work and life of Fidel Castro and his impact not only on Cuba but the world.  If you have not read Fidel’s “spoken autobiography”, Fidel Castro: My Life, I strongly recommend it.  I will not try to offer anything approaching an analysis of the man and his times.  What I can say, however, is that there are certainly criticisms to be offered, and differences of opinion of the dynamics of the Cuban Revolution. That is all fair game. At the same time, it has been a rare moment when a leader, particularly of a small country, has been willing to thumb his or her nose at the capitalist juggernaut and seek a different path. Added to this has been, particularly in a Western Hemispheric context, the challenge of taking on racist oppression and approaching it as the cancer that it is, a disease to be removed.

The one and only time that I met Fidel Castro was in January 1999 when I was on a TransAfrica delegation led by the organization’s first president, Randall Robinson. At the last minute, the night before we were to leave Cuba, we were informed that we would have an opportunity to meet with President Castro.

It was close to midnight when we were informed that we needed to board the bus and head to his office. When we arrived we walked into a waiting room in anticipation of the meeting. Suddenly a door opened and out came an old man in an olive green uniform. Yes, it was Fidel. I think, quite irrationally, I was expecting the young Fidel of the 1960s. But here was someone about the same age as my father. He circulated around the room and was introduced to our delegation. We then retired to another room to begin our meeting.

It is hard to describe what happened next, and probably equally hard for anyone to believe it. We sat in the room with Fidel until about 3:30 a.m. He never lost a beat. He never seemed tired.  In fact, as the minutes and hours went forward, he seemed to gain energy! Fidel spoke with us about the Cuban Revolution, race, and many other issues. Yes, he spoke a lot, but we were transfixed. And, when we asked him questions, he would consider the matter and always offer a thoughtful response, rather than retreating into rhetoric. It was particularly illuminating when he informed us that the Cuban Revolution had underestimated the power of racism. As he said at the time, when the 26th of July Movement (the revolutionary organization that led the anti-Batista struggle) took power they thought that it was enough to render racist discrimination illegal and that should settle the matter. The entrenched power of racism, even in a society that was attempting to root it out, was more substantial than they had anticipated.

Hearing this from Fidel represented a special moment. There has frequently been a defensiveness among Cuban officials about matters of race in Cuba, despite the tremendous advances that they have made, advances probably of greater significance than any other country in the Western Hemisphere.  Yet, manifestations of racism remain and, to our surprise, Fidel was prepared to address them.

Fidel Castro’s demise comes as no surprise. He had been facing health challenges for some time. Nevertheless, given the number of attempts on his life and the other challenges that he had faced, there has been a bit of magical thinking for many people, believing that he would, somehow, always be there.

For many of us in “Black America”, Fidel represented the audacity that we have desired and sought in the face of imperial and racial arrogance. While it is unfortunate that some of us have withheld concerns and criticisms out of respect for Fidel and the Cuban Revolution, it is completely understandable. After all, this was the country that deployed troops to Angola that helped to smash the South African apartheid army and their Angolan allies.  This was the country that has deployed doctors in the face of countless emergencies, to countries that could never afford such assistance.  This is the country that has studied and come to understand hurricanes in a way unlike most in the hurricane region, so much so that it offered assistance to the U.S. in the aftermath of the 2005 Hurricane Katrina, assistance that the then Bush administration turned down.

Let his soul rest easy. And, let the Cuban people continue on their way free of outside interference.  Their path has been one upon which they have insisted. Fidel Castro was one important component in making that happen.  And, if that was not enough, he and the Cuban Revolution shook the world of the 20th Century.

Bill Fletcher, Jr. is a talk show host, writer and activist. He can be followed on Twitter, Facebook and at www.billfletcherjr.com.