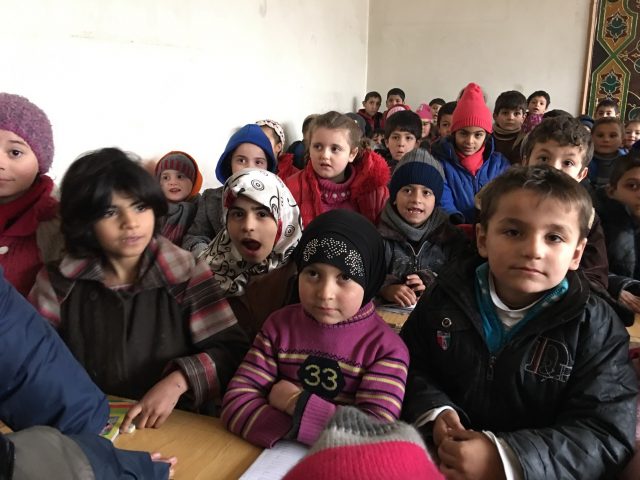 My friend, a senior UN official based in Amman, Jordan, recently received a newsletter from an Israeli institution – “IMPACT-se”. Their report was called, ‘modestly’, “Reformulating School Textbooks During the Civil War”.

It is full of analyses of the Syrian curriculum.

Interesting stuff, without any doubt: manipulative, negative, but interesting. It made it to many other places in the Middle East; to Lebanon, for instance, where even the word “Israel” is hardly ever pronounced.

Predictably, being compiled in Israel, the report trashes Syria, its ideology, and the determined anti-imperialist stand of President al-Assad.

However, that may backfire. Excerpts that are quoted from the Syrian curriculum would impress both education experts, as well as the general public, if they were to get their hands and eyes on them. And I am trying to facilitate precisely that, in this essay.

What the report found outrageous and deplorable, others could find very reasonable and positive. Let’s read, here is what the “IMPACT-se” is quoting, while ringing alarm bells:

“Saddam Hussein took power, and his period witnessed a number of wars in the Arab Gulf area. The first was with Iran, called the First Gulf War (1980–88), which occurred through incitement by the US, in order to weaken both countries. History, Grade 12, 2017–18, p. 105.”

Well put, isn’t it? But it gets much better, philosophically. Imagine, this brilliant intellectual stuff is actually served to all Syrian children in their public schools, while in Europe and North America; kids are fed with neo-colonialist mainstream propaganda. No wonder that Syrian children are much better versed in what is happening in the world. No wonder that millions of Syrian refugees are now ready to return home, after the abuse they received abroad, and after realizing how indoctrinated and brainwashed by Western propaganda, the people all over the world are.

“IMPACT-se” continues quoting the Syrian curriculum, naively thinking that the words engraved there, will terrify the entire world:

“This competition and struggle worsened as the capitalist system developed and new occupying forces such as the US, took control over international politics. It exploited its scientific, technological, economic and military supremacy in order to expand its influence and [gain] control over the capabilities of the peoples of the world. This was done in cooperation with its allies, to increase its presence in the international arena as the only undisputed superpower. National Education, Grade 8, 2017–18, p. 81.(The US) strives to maintain its supremacy by monopolizing developing technology, controlling wealth and energy sources in the world, most importantly oil, and forcing its hegemony on the international community. National Education, Grade 8, 2017–18, p. 82.

This could be easily written by the progressive economist Peter Koenig, by the international lawyer Christopher Black, or, why not, by myself.

The people, who worked on the Syrian curriculum, combined two things brilliantly: 1) indisputable facts, 2) elegant simplicity! Actually, this curriculum should be offered not only to the Middle East kids, but all over the world.

Look how skillfully and honestly it summarizes modern history:

“After the disappearance of international balance and unipolar hegemony took control of the world, the US began searching for excuses to justify its intervention in other countries. It occupied Afghanistan in 2002, under the pretext of fighting against “terrorism” in order to realize its political and economic goals. One of the goals was to build an advanced military base close to countries which the US considers to be dangerous (Russia, China, India, Iran and North Korea). In addition, Afghanistan had many assets (such as iron ore and gas). In 2003, the US—helped by a group of countries—declared war on Iraq under the pretext that Iraq was holding weapons of mass destruction and aiding terrorism. The occupation came after an unjust siege and air strikes over Iraqi cities and institutions, without authorization from the UN general assembly and the Security Council. National Education, Grade 8, 2017–18, p. 82

Making the world become one form, one structure and one model, which is the most powerful model now controlling the world, economically and militarily—the American model. The hegemony of the capitalist system . . . turning the world into a consumer market for Western products and ideas, while stripping the nation of its principles, customs and traditions, abolishing its personality and identity, first diluting and then gradually eliminating nations and cultures. National Education, Grade 12, 2017–18, p. 31.”

According to “IMPACT-se”, this is supposed to scare random readers, providing proof how evil the ‘regime in Damascus’ is!

The opposite is true.

An international (non-Western) educator, who is presently based in the Middle East, explained to me over a cup of coffee. I think that this statement is actually a good summary of what many others that are studying the Syrian curriculum really feel:

“Education reflects the vision of a given society. The heart of what a society expects from its citizens is in the curriculum. Having carefully read the analysis of the new Syrian curriculum and textbooks reinforces my strong conviction of how great a society Syria really is.”

Let us see the ‘other side’; those who are critical of Syrian education, those who are making a living from such criticism and from antagonizing the system.

ESCWA (United Nations Economic and Social Commission for Western Asia), based in Beirut, Lebanon, has an initiative defined as ‘the future of Syria for the peace-building phase’. This ‘process’ involves Syrian experts from all walks of life.

But who are these experts? In 2018, during the expert’s meeting on education, the list included these specialists:

– Head of an education NGO in Lebanon

– Academics and researchers now based in Turkey and Germany

Clearly, if at this meeting any participants were Syrians, they were ‘former some things’. Meaning exiles, anti-government cadres, and mostly pegged to some Western organization (predominantly the organizations based in France or Germany). Not one person from the legitimate government of Syria was invited! A typical Western approach: “about them, without them”.

And these people who are serving Western interests, are supposed to help to define a component on education which is considered vital to “reconciliation and social cohesion in post-war Syria”.

Predictably, instead of promoting reconciliation, the speeches were full of hate, bitter and aggressive, anti-Syrian and pro-Western. ‘Experts’ used terminology such as: ‘Hegemony of the Syrian regime’, ‘The Ba’ath Party is only concerned about ideology, never giving Syrians an identity’ (they were actually demanding that religions would serve as ‘identity’, replacing the presently secular Syrian state), ‘We need to talk about the truth of what happened in 2011, what led to the war in 2011. Without that nothing makes sense’ (but the ‘truth about 2011’ in their minds has definitely nothing to do with the fact that the West encouraged the anti-government rebellion, injected jihadi cadres and triggered the brutal civil war aimed at overthrowing a social state).

Their main point seems to be: ‘The war has strengthened the culture of hatred’.

Correct, but not because of the Syrian state, but, because of people like those ‘experts’!

What do they really want? Religion instead of secularism, capitalism instead of socialism, and of course, the Western perception of ‘democracy’, instead of a patriotic and pan-Arab independent vision of the state. 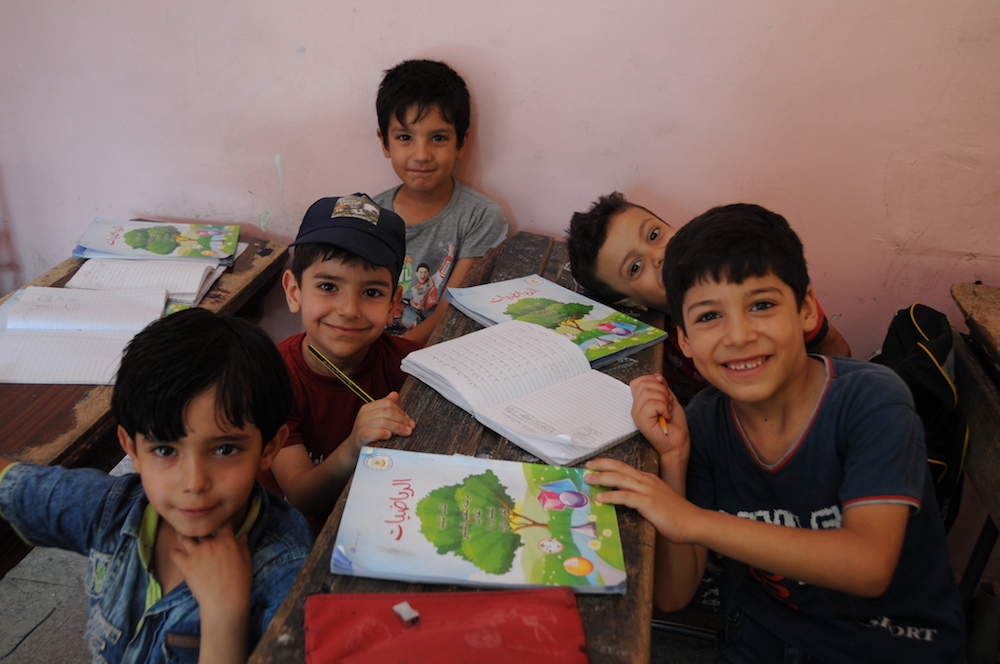 No matter how one turns it, the Syrian education system, including its curriculum, appears to be greatly superior to those in the neighboring countries. Perhaps that is why it is being placed under scrutiny and under attack.

After all, wasn’t the main goal of the West, in 2011 and after, to destroy yet another socialist, internationalist state that was primarily serving its people?

And the state of Israel? What is “IMPACT-se” mainly complaining about? What is irking it most, in the Syrian curriculum? Perhaps this, in its own words and analyses:

“The Syrian curriculum bases Syrian national identity on the principles of a continued struggle to realize one Arab Nation that includes all Arab states, constituting one country, the “Arab Homeland.” The textbooks present the borders dividing the Arab states as artificial, having been imposed by European colonialism.”

For most of us, this is actually, not bad, is it?

“The current borders are political ones, drawn through the policy of the colonial powers that had controlled the region, especially France and Britain. They do not overlap the natural borders that used to separate the Arab Homeland from the neighboring countries. So, important changes took place in these borders to the benefit of those countries and to the detriment of the Arab land. Geography of the Arab Homeland and the World, Grade 12, 2017–2018, p. 13.”

What is incredibly impressive, is, how the Syrian curriculum addresses the Soviet period of its close ally – Russia:

“We shall become acquainted with the reality of Russia prior to the Communist Revolution, and the causes which led to its political, economic, social and intellectual renaissance, from World War I until the dissolution of the Soviet Union and the establishment of the Russian Federation in 1991. History, Grade 8, 2017–18, p. 98.

The Socialist Revolution in Russia broke out in order to confront the imperial regime. It declared the establishment of the first socialist country in 1917. [The Revolution] was based on the rule of the workers and the peasants, and it had a global impact, as it supported national liberation movements. History of the Modern and Contemporary World, Grade 11, 2017–18, p. 168.

Gorbachev took over the leadership of the state and party in 1988, and aspired to implement a plan of economic, social and ideological reconstruction. However, the imperialistic countries conspired against the destiny of the Soviet Union and took advantage of the administrative corruption and the circumstances of multiple nationalities, leading to its dissolution in 1991 and the establishment of the Russian Federation in its place. History, Grade 8, 2017–18, pp. 99–100”

Actually, if I could, if I were to be allowed to, I’d love my publishing house (Badak Merah) to publish the Syrian curriculum, or at least its part on history and politics, for everyone outside Syria to read.

What the Israeli “IMPACT-se” sees as alarming or negative, most of people all over the world and particularly in the Arab region, would definitely perceive as truthful, optimistic and worth fighting for.

Are the experts from “IMPACT-se” so naïve that they do not realize it? Or is there something else going on? Perhaps we will never find out.

No matter what: thank you for reminding us of the great Syrian curriculum! It clearly shows how great a nation Syria is!