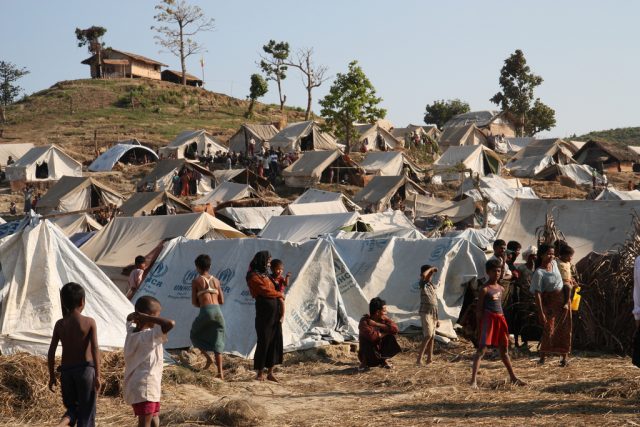 Reports on a recent incident in a Colombo suburb, where a refugee centre housing a group of Rohingya was attacked by a mob led by a Buddhist monk, present a number of points that remain unexplained.

There was a mismatch between the monk’s branding of the Rohingya refugees as ‘terrorists,’ and the impression that came across in video footage which showed some poor, frightened looking men, women and children including infants being escorted out of a safe-house by police.

These events took place a month after reports of a terrorist group called the Arakan Rohingya Salvation Army (ARSA) having attacked police posts and an army base in Myanmar’s Rakhine state, sparking a security crackdown on the community. But the Rohingya who were targeted in Sri Lanka hardly corresponded to the image of radicalized militants that the monk sought to project.

Although it was on September 26 that the group stormed the building and smashed windows and furniture, it turned out that the 31 refugees had been in Sri Lanka since April under the protection of the UN Refugee Agency (UNHRC).  The attack was staged after five months had elapsed, in the aftermath of the violence in Myanmar that spurred an exodus of refugees to Bangladesh and other neighbouring countries. Akmeemana Dayarathana, a monk heading a radical group called Sinhale Jathika Balamuluwa (‘Sinhalese National Force’) was arrested in connection with the episode and later released on bail.

The public may also have noticed that the monk in his remarks to the media asserted that the UN Human Rights Council has given the Rohingya shelter.  Nowadays most people in Sri Lanka would be aware that it is the UN High Commission for Refugees (UNHCR) and not the Human Rights Council (UNHRC) that deals with refugee issues.  The UNHRC however is the more controversial agency, having adopted an unpopular resolution against Sri Lanka in 2015.

The ultra-nationalist monk’s rhetoric is not very different from that of the Bodu Bala Sena (‘Buddhist Force’), another group of hard-line monks accused of having been behind anti-Muslim violence in the southern coastal town of Aluthgama in June 2014.  Though they remain on the fringe of the political landscape and are not representative of Sri Lanka’s Buddhist majority, it appears that these groups are fighting for the same piece of political turf.  It is possible that BBS may have lost some ground to Dayarathana’s followers. If there are hidden benefactors, the question arises as to whether they have changed their preferences.

Social media sites associated with the arrested monk have posted banners depicting Myanmar’s de facto leader Aung San Suu Kyi and expressing solidarity with Myanmar’s leadership ‘on behalf of the world’s Buddhists.’ Myanmar’s radical Buddhist monk Ashin Virathu – linked to tensions between Buddhists and Muslims in Myanmar that resulted in violence in 2012 – established ties with BBS when he visited Sri Lanka in September 2014.  Addressing a BBS convention in Colombo during his visit Wirathu is reported to have said they would ‘work together to protect their common religion.’

Further hints of possible attempts to stir up sectarian strife in Myanmar have emerged, in reports that Hindus too were attacked, and that the victims who initially said Myanmar’s military and Rakhine Buddhists attacked them later changed their position to blame Muslims:

“At first, they (Hindu refugees who fled) blamed the Myanmar army’s agents or Rakhine Buddhists or a combination of the two. Then they changed the tune the very next week or ten days after saying that Rohingya Muslims and the Islamic terrorist Arakan Rohingya Salvation Army (ARSA) were the hooded men in black dress who attacked and murdered Hindus in villages like Fakirabazar.” (P K Balachandran – ‘Mystery over killing of Hindus in Myanmar,’ Daily Mirror 03.10.17)

While issues concerning the Rohingya community have been festering in Myanmar for years, their targeting in Sri Lanka raises concerns as to whether there are forces at work that seek to spread flames cross-nationally and regionally. Despite having lived in Myanmar for generations the Rohingya are denied citizenship, making them a ‘stateless’ community and therefore easy targets. There is a lack of clarity regarding the origins of the relatively new terrorist group ARSA which staged attacks on security posts.  Its leader does not appear to be a ‘home-grown’ insurgent, with reports saying he has links to Saudi Arabia and Pakistan.  It remains murky as to who was responsible for setting fire to villages in Rakhine state. Some reports blame the terrorists while others accuse the military.

Tony Cartaluuci, for one, has pointed out that “Saudi-backed ‘Rohingya militants’ no more represent all Rohingya than ISIS represents all Sunnis.” He says that Suu Kyi’s movement, anti-Rohingya violence, and alleged ‘backlash’ all come with ‘foreign-footprints,’ creating a situation that “places in jeopardy not only the majority of the people in Myanmar – Buddhist and Rohingya alike – who wish to live in peace, but the entire region …”

Cartalucci argues that while some say violence targeting the Rohingya was bound to provoke a violent reaction, armed insurgencies do not spontaneously emerge. “Isolated acts of violence, organized gangs with very limited capacity are possible, but the violence the Wall Street Journal is describing is not “backlash,” it is foreign-funded politically-motivated militancy operating under the cover of “backlash” he writes, in an article published online by Global Research.  “The current client regime presiding over Myanmar – created and perpetuated by American cash and support – is being intentionally pitted against a militancy funded and organized by America’s closest ally in the Middle East – Saudi Arabia.”

From a geopolitical point of view it is interesting to note that China has substantial interests in Myanmar, just as it does in Sri Lanka.  Cartalucci draws attention to the fact that Rakhine state is the starting point of one of several of China’s One Belt One Road projects, connecting Sittwe Port located there to infrastructure leading to Kunming in China.  “Not only does the violence in Rakhine state threaten Chinese interests, it also helps set a pretext for direct US military involvement – either in the form of “counter-terror assistance” as is being offered to the Philippines to fight US-Saudi-backed militants from the Islamic State, or in the form of a “humanitarian intervention.” In either case, the result will be US military assets placed in a nation directly on China’s border – in Southeast Asia, just as US policymakers have sought to do for decades” he says.

There have been calls for intervention in Myanmar based on R2P (‘Responsibility to Protect’) – the concept underlying US-led interventions taking place already in Sri Lanka, through a UNHRC resolution.  R2P advocate Ramesh Thakur said in a newspaper article that ASEAN and the UN bear responsibility for protecting ‘all of Myanmar’s people’ and that the matter must be referred to the International Criminal Court (ICC) if independent, impartial investigations and prosecutions are not forthcoming domestically.

Adding weight to arguments that see external forces at work behind Myanmar’s communal tensions, Gearóid Ó Colmáin writing in the American Herald Tribune says:  “The strategic objective of Western imperialism in Asia is to exploit those tensions by stoking sectarian hatred – a Huntingtonian ‘clash of civilisations’ which provides the pretext for ‘humanitarian’ intervention’ or ‘anti-terrorist’ counter-insurgency operations by the United States and its allies. The growing Buddhist/Muslim tensions provide the US with the pretext he (sic) needs to counter the rise of China. Only in that context can one begin to understand imperialism’s new humanitarian cause- the Rohingya.”

The attack on a centre housing Rohingya refugees in Sri Lanka – whose presence few even knew about till an ugly incident brought them into the media spotlight – would seem to add to the concerns of analysts that the growing religious tensions in the region are not random or isolated.