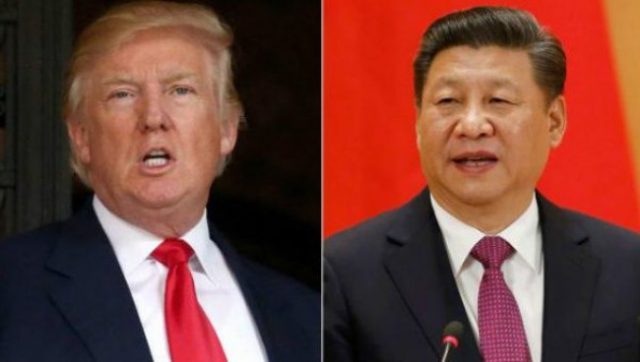 Australia is sleepwalking into a confrontation with China. Wars can happen suddenly in an atmosphere of mistrust and provocation, especially if a minor power, such as Australia, abandons its independence for an “alliance” with an unstable superpower.

The United States is at a critical moment. Having exported its all-powerful manufacturing base, run down its industry and reduced millions of its once-hopeful people to poverty, the principal American power today is brute force. When Donald Trump launched his missile attack on Syria ‒ following his bombing of a mosque and a school ‒ he was having dinner in Florida with the President of China, Xi Jinping.

The attack on Syria was clearly, above all, to show his detractors and doubters in Washington’s war-making institutions ‒ the Pentagon, the CIA, the Congress ‒ how tough he was and prepared to risk a war with Russia. He had spilt blood in Syria, a Russian protectorate; he was surely now on the team. The attack was also meant to say directly to Xi, his dinner guest: this is how we deal with those who challenge the top dog.

China has long received this message. In its rise as the world’s biggest trader and manufacturer, it has been virtually encircled by 400 US military bases ‒ a provocation described by a former Pentagon strategist as “a perfect noose”.

This is not Trump’s doing. In 2011, the then president Barack Obama flew to Australia to declare, in an address to parliament, what became known as the “pivot to Asia”: the biggest build-up of US air and naval forces in the Asia-Pacific region since the Second World War. The target was China. America had a new and entirely unnecessary enemy. Today, low-draft US warships, missiles, bombers and drones operate on China’s doorstep.

In July, one of the biggest US-led naval exercises ever staged, the biennial Operation Talisman Sabre, will rehearse a blockade of the sea lanes through which run China’s commercial lifelines. Based on an Air-Sea Battle Plan for war with China, which prescribes a “blinding” attack, this “war game” will be played by Australia.

This is not urgent news. Rather, the news is the “threat” that China poses to “freedom of navigation” in the South China Sea by building airstrips on disputed reefs and islets. The reason why ‒ the “noose” ‒ is almost never mentioned.

Australia in the 21st century has no enemies. Not even a melancholy colonial imagination that conjured Asia falling down on us as if by the force of gravity can conjure a single contemporary enemy. No one wants to bomb us or occupy us. Well, not yet.

As Australian political, military and intelligence establishments integrate with the war plans of a growing American obsession ‒ the shift of trading, banking and development power to the east ‒ we are certain to make an enemy. A frontline has long been marked at Pine Gap, the spy base the CIA set up near Alice Springs in the 1960s, which targets America’s enemies, beckoning, of course, massive retaliation.

Last October, Labor’s defence spokesman, Richard Marles, delighted the US admirals and generals at a conference in Hawaii by demanding that Australian naval commanders should have the authority to provoke nuclear-armed China in the disputed South China Sea. What is it about some Australian politicians whose obsequiousness takes charge of their senses?

While the Turnbull government has resisted such a clear and present danger, at least for now, it is building a $195 billion war arsenal, one of the biggest on earth ‒ including more than $15 billion to be spent on American F-35 fighters already distinguished as hi-tech turkeys. Clearly, all of this is aimed at China.

This view of our region is shrouded by silence. Dissenters are few, or frightened. Indeed, who speaks out with an unambiguous warning ‒ apart from Paul Keating?

Who tells us that, in response to the “noose” around it, China has almost certainly increased its nuclear weapons posture from low alert to high alert?

And who speaks the heresy that Australia should not have to “choose” between America and China: that we should, for the first time in our history, be truly modern and independent of all great power: that we should play a thoughtful, imaginative, non-provocative, diplomatic role to help prevent a catastrophe and so protect “our interests”, which are the lives of people?

John Pilger’s The Coming War on China airs at 8.30pm this Sunday, April 16, on SBS. His website is johnpilger.com

No Matter What the Western Propaganda Says, Chinese Democracy is Alive and Well!