Assault On The Venezuelan Embassy In Washington, A Test Of Fire For Multilateralism 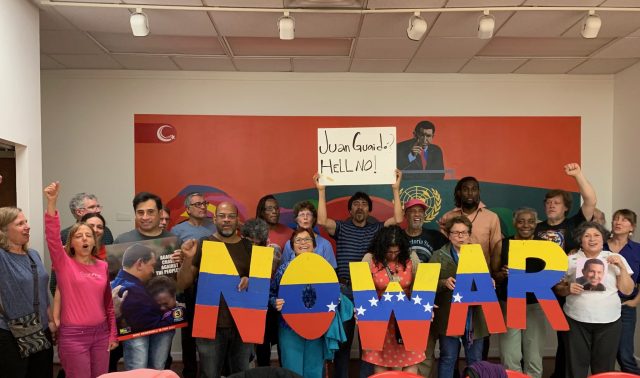 Supported by the US State Department, the Venezuelan opposition has announced that it will take control of the Washington embassy this week. Immediately, a solidarity group met at the embassy and made a declaration based on the rights and sovereignty of Venezuela under the Vienna Convention. It has been signed by almost a thousand people in just a few days.

An article by Alex Anfruns

This statement is signed by an Embassy Protection Collective, which was quickly formed by bringing together several peace groups, including the Coalition Coalition, Codepink and Popular Resistance. A day before the announced assault, Kevin Zeese, one of his spokesmen, explained that the members of the collective “are not intimidated because they are not breaking any law”. In addition, in another message, Zeese recalled that an attempt by the State Department would mean a “violation of international law and that arrests of members of the collective would be” illegal “and subject to legal prosecution, as these people installed with the authorization of the Venezuelan authorities. Fearing the imminent action of the police,

Since the beginning of the year, these offensives, which seek to deprive the government of Nicolas Maduro of its diplomatic networks abroad, have increased in intensity by betting on the effect that these actions would provoke on the international scale. Two months ago, on February 23, some Venezuelan opposition members tried unsuccessfully to expel Ms. Claudia Salerno, Venezuelan ambassador to Brussels, after claiming the legitimacy of Juan Guaido and his representatives. This occurred the same week that two other attacks against the Venezuelan Embassy in Costa Rica and Ecuador took place. Last March, Guaidó’s representative had already taken control of the Venezuelan consulate in New York and two buildings belonging to the Venezuelan Ministry of Defense. It was at this time that he had designated the missing trophy to his collection: taking the embassy in Washington.

Contrary to the European case, where actions of the overthrow of international law on the soil of the concerned countries would be perceived negatively by the authorities, worried of their image vis-a-vis the public opinion (1) the Trumpiste vision of the world which prevails to the US seeks to openly challenge her through incessant provocations. The arrest of Julian Assange, after the Ecuadorian government decided to return to the asylum he had been giving him for seven years in his embassy in London, proves that the United States is determined to destroy the international law system. digging the cracks that exist inside countries. Thus the term “ally” has lost all meaning in the present context, and blind obedience becomes the supreme value. Dialogue, mediation, listening, the exchange of points of view and the respect of others, pledges of civility, are thrown in the garbage without care. The managerial worldview at Trump is in line with US advocacy. But, as the Spanish saying reminds me wisely, the urgency has always been a bad counselor …

This symbolic takeoff was to occur shortly before Venezuela abandoned the Organization of American States (OAS), as scheduled in this Saturday’s agenda. Indeed, in 2017 Venezuelan Vice President Delcy Rodriguez had expressed her willingness to leave this organization following the multiple attempts to exclude this country, which each time resulted in an insufficient vote of its member countries. During special sessions at the OAS Permanent Council, his Secretary General Luis Almagro’s unilateral anti-Venezuela agenda has suffered many setbacks, highlighting his almost obsessional activism in favor of US interests. On April 10, the recognition of a new “Venezuelan ambassador to the OAS” sent by Guaido, has again caused the rejection of a dozen member countries.

This April 27 will also be the occasion of a day of mobilization for Chavismo and the opposition, for opposite reasons. The former will make a day of resistance and defense of national sovereignty, while the latter will celebrate a step forward in the architecture of his parallel government, supported by a fragile crutch made in Washington.

The country is experiencing an increasingly close siege, since President Obama signed in January 2015 a decree considering Venezuela as “an extraordinary threat to the security of the United States” (2). The sanctions inflicted on senior Venezuelan officials and the $ 11 billion confiscation of CITGO, the US-based subsidiary of PDVSA, are a continuation of a single US foreign policy, conducted since the infamous Monroe doctrine of Latin American countries by preventing them from forming cooperative ties with each other and with other powers.

So far, the recipe for the coup d’etat for Venezuela has come up against a stubborn reality: the support of the people for its tradition of political independence embodied in the Bolivarian armed forces. The outlaw action of this putschist sector of the Venezuelan opposition abroad, and especially on US soil, could thus trigger a new wave of solidarity with Venezuela.

But the memory of the 1970s should also alert us. As part of the Condor Plan, the persecution and assassination of political opponents, especially from Chile’s Allende, by Pinochet’s agents had crossed the border before the US administration decided to stop them. For example, on September 21, 1976, a car bomb attack targeted former Allende ambassador and minister Orlando Letelier, who was murdered in the streets of Washington along with his assistant. (3)

Be that as it may, the Venezuelan people is the last concern of the governments that have recognized Guaidó as their new mascot. These attacks on Venezuelan sovereignty further degrade the situation of Venezuelans in the diaspora, as Guaidó’s representatives do not have the least expertise in assisting the management of commercial interests and consular services for Venezuelan citizens. The recognition of Juan Guaidó by about 50 countries is only an empty shell destined to nourish the illusion of a political alternative to Chavismo.

Meanwhile, the Venezuelan government continues to strengthen and develop its ties with important international allies, such as Russia and Turkey. The recent visit of Foreign Minister Jorge Arreaza to Europe, the Middle East and Africa, as well as his resolute action in the Non-Aligned Countries Movement, is tangible proof of this “defense of multilateralism” and the “Diplomacy of peace”. Venezuela is not alone!

1) This does not mean that the objectives of the European powers as well as their modus operandi really differ. A declassified document from the US intelligence agency shows that European countries have shown interest in replicating the large-scale crackdown that the United States deployed in the 1970s in Latin American countries, via the “Condor Plan”. See also our interview with Mr. Almada.

2) “There is a deliberate desire to hide what is happening in Venezuela,” interview with the ambassador of the Bolivarian Republic of Venezuela for the EU, March 2015.

3) To go deeper into the details of this affair, read the book The Condor Years – How Pinochet and his Allies Spread Terrorism on Three Continents , by John Dinges (Éditions La Découverte)

Source : Journal of Our Americas

Exclusive interview with Nicaraguan Foreign Minister: “We call on the US to respect international law”