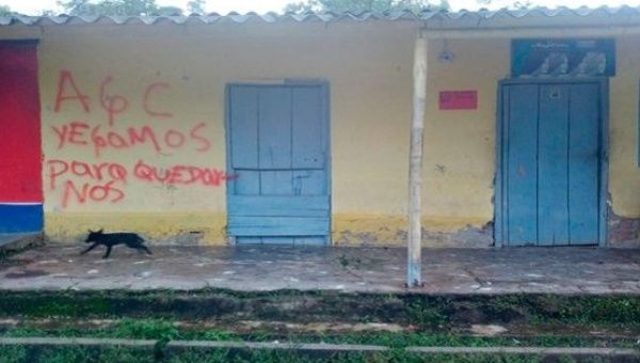 Of the 242 municipalities where the FARC were present, 74 have been taken over by paramilitary groups, according to a report.

Paramilitary violence is far from disappearing in Colombia. Instead, it is becoming one of the biggest obstacles to achieving the stable and long-lasting peace outlined in the Havana peace agreements.

Neo-paramilitary groups, the successors of the paramilitary or criminal grounds as President Juan Manuel Santos likes to call them, continue to threaten, murder and force people from their homes.

The most recent proof of this took place on July 12 in San Jose de Apartado, a neighborhood in the Apartado municipal in Antioquia, when the homes of the residents were vandalized with graffiti announcing the arrival of the Gaitanistas Self-Defense Forces of Colombia, known by its Spanish acronym AGC.

“The AGC has come to stay” was written on one of the signs left by a member of the paramilitary group.

It was not long before residents of the small township, located in Uraba in the state of Antioquia, the scene of one of the bloodiest chapters of paramilitary violence, expressed their concern.

But the response of Armed Forces to the threat caused more fear than the graffiti.

“What’s sad is that the authorities are saying that it was the same community and that it is nothing to worry about,” said a local campesino who wished to remain anonymous.

With so little response from state institutions, the residents began to erase the signs and instead draw pictures about peace.

“We are closing a page and together we will begin a new story in which reconciliation is the protagonist,” says one of the new messages written by the campesinos. 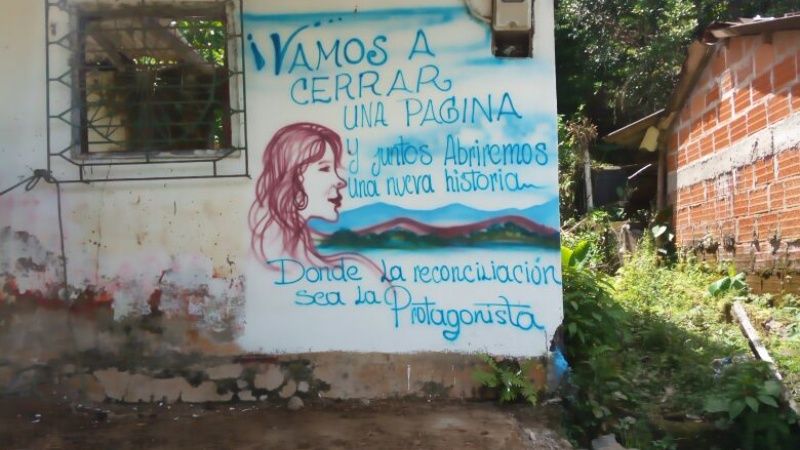 In the decade between 1990 and 2000, the appearance of the signs announcing the arrival of the Gaitanistas Self-Defense Forces of Colombia was followed by various massacres in this region of the country.

The last of these massacres occurred on Feb. 21, 2005 when members of the paramilitary group Heroes of Tolova assassinated eight campesinos, among them a young girl whose neck was cut with a knife, according to community testimony.

“They’re still after this land, these highlands and all the resources that are found here,” said a campesino.

The renewed threat of paramilitary violence has led to serious human rights violations in Colombia.

The latest UNHCR report found that 7,000 people have been forced from their homes since the beginning of 2017 — of which 90 percent were due to paramilitary threats, according to experts of the conflict. This comes amid escalating threats against social leaders with 68 killed just this year.

The day-to-day reality for these communities continues to be complex, despite the peace agreement between the FARC and the government, which paradoxically has led to new dynamics of violence.

According to the latest report by the Peace and Reconciliation Foundation, this is due to the lack of state presence in territories formally controlled by the FARC. The report found that of the 242 municipalities where the FARC were present, 74 have been taken over by paramilitary groups.

Indeed, Uraba has been one of the regions in Colombia worst affected by paramilitary violence. In San Jose de Apartado, around 300 people have been assassinated by paramilitaries, which does not take into account the countless number of campesinos who have been forced to flee their homes.

Milton Henao is a teleSUR correspondent in Colombia.

Is There a Drugs War in Latin America?