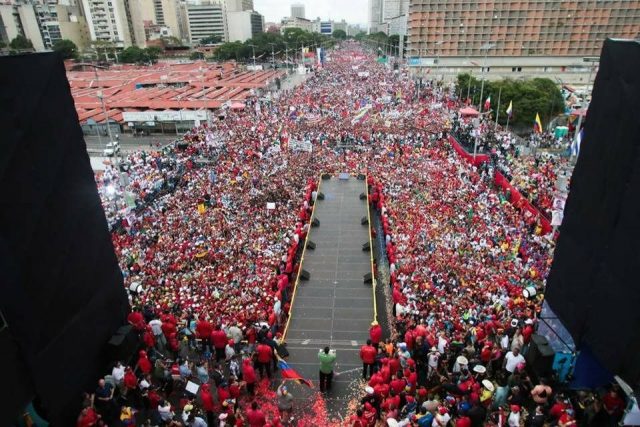 May 17 marked the end of the political campaign for the upcoming presidential and legislative council elections, that will take place on Sunday May 20. In Caracas, in the traditional rally-holding place in Avenida Bolívar, Nicolás Maduro gave his closing campaign speech, surrounded by a large crowd that had mobilised in the early hours of the morning and converged from multiple locations in Caracas.

In his speech, Maduro reiterated some of the main tenets of his campaign: the promise to take on the economic “mafias” and to bring forth an “economic revolution” (1), the rejection of foreign interference in Venezuelan affairs, and a call for participation in the upcoming elections. He also renewed a call for dialogue addressed to all sectors of Venezuelan society.

This final rally brought the curtain on a campaign that saw Maduro all over the country, supported by what has become an impressive electoral machine, with a big ability to mobilise people. Multiple sectors inside the heterogeneous chavismo also voiced their support for Maduro. Even groups that have kept a critical line with regard to government policy in recent times have it clear that only a Maduro victory can guarantee the continuity of the Bolivarian Revolution and the possibility to continue the struggle for socialism. 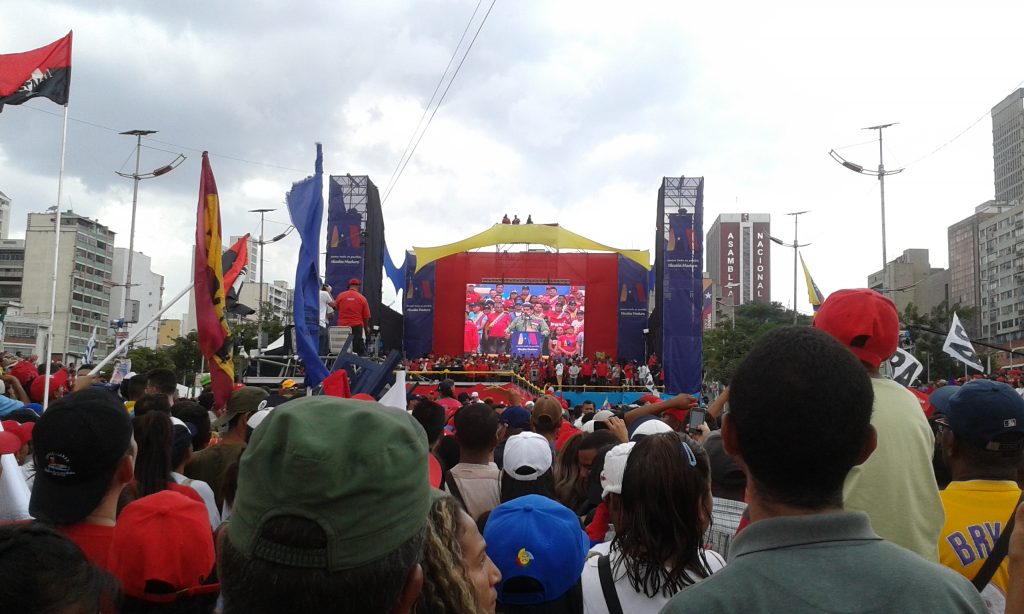 The two main opposition candidates on 20M are Henri Falcón and Javier Bertucci (out of the other two initially running, Reinaldo Quijada is expected to have a very small showing and Luis Ratti joined Falcón). For a while the possibility of a unified front with a single candidate hung in the air, but did not materialise in the end, which makes Maduro the favourite for the upcoming vote.

Henry Falcón “disobeyed” instructions and threats from the US and the main opposition parties of the MUD, stepping forward as a candidate. His main proposal is to dollarise the economy, as well as appeal to instances such as the World Bank and the International Monetary Fund for support. However with the main anti-chavista figures and parties insisting in their non-recognition of the elections and calling on people to stay away, he will find it hard to mobilise the middle class, which historically has been the core anti-chavista vote.

While Falcón focused mainly on holding meetings and press events, evangelical pastor Javier Bertucci made use of his experience and mobilising capacity to hold a few massive events on the streets. Bertucci refused to step out of the race in favour of Falcón, believing (or having us believe) that he is in a better position than his rival. In any case, his arrival on the political scene is surely with a view beyond these elections, looking to capitalise on the disastrous decisions of the opposition in the recent past to present himself as a political alternative in the future, in a similar fashion to what has been seen with evangelical movements in other Latin American countries. 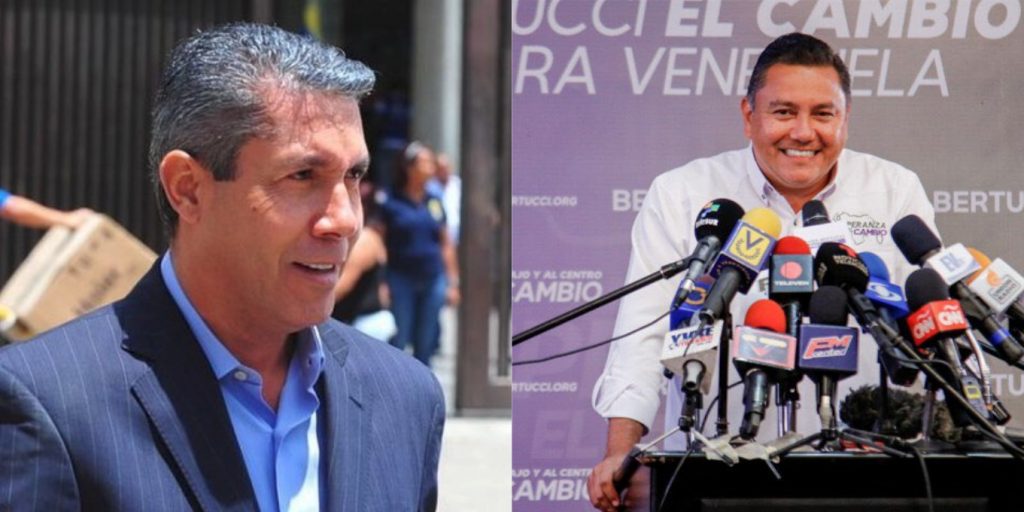 These elections arrive with Venezuelan suffering from a deep crisis and growing economic war. Prices have skyrocketed in recent months, and the government response through salary increases and bonuses has failed to keep up with inflation, resulting in a very difficult reality for ordinary Venezuelans. There is also an important international dimension to this. The US empire, and its loyal allies, have been ramping up the attacks against Venezuela, for example barring all access to credit or making it more difficult to pay for imports. 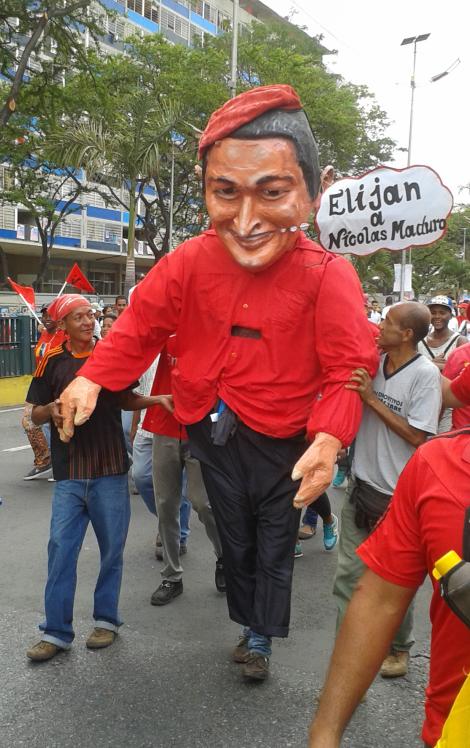 Along these lines, the US and its echo chamber, the Lima Group, have railed against these elections, arrogantly demanding they be suspended and announcing, months in advance, that they would not be legitimate and that they would not recognise the results (2) (3). This is simply a consequence of the fact that an anti-chavista victory was far from certain. After a growing wave of violence in the first half of 2017, chavismo responded with remarkable strength, achieving peace with the Constituent Assembly elections and then going on to win regional and municipal elections. In light of all this, the decision was to abandon the electoral route and look for a different “regime change” avenue.

Taking all of this into account, the 20M elections are a key moment in the history of Venezuela and Latin America. A chavista defeat would imply a massive setback for the left in Latin America, and it would bring about a merciless onslaught against poor and working-class Venezuelans. But at the same time a Maduro victory will be greeted with even greater imperialist hostility, with further sanctions and an eventual oil embargo on the horizon.

All of this does not discard that there are important choices and changes to be made in terms of government policy, especially in what concerns the repeated appeals, always followed by preferential dollars or credit, to private businessmen, so that they will produce or import. At the end of the day the strength and creativity of the pueblo are the only resource that really matters, and the mobilisation in defence of the revolution, even in the difficult current circumstances, show that the political conscience that was built is perhaps the most important achievement of the past 20 years. And it shows that there is no way forward except to radicalise the revolution. There is a tough battle coming up on May 20, and then another one the following day.

(1) With plenty of goodwill we can grant that a strong electoral showing will give Maduro some backing to implement tough measures, but on the other hand one cannot help but wonder why these tough measures were not put into place in recent months and years.

(2) Trying to out-Trump his master, Colombian president Santos announced that he was aware of a months-long evil plan by the Venezuelan “regime” to register and transport hundreds of thousands of Colombians and have them vote!

(3) Here we also have to wonder what the “recognition” from the US and its followers is actually worth. We only have to go back a few months to the Honduran elections, where there was a blatant display of fraud, and nevertheless results were “recognised”.