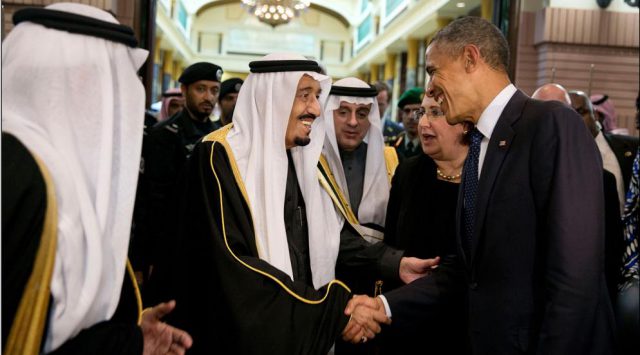 Contrary to popular media portrayals, the Middle East wasn’t always plagued by regressive fundamentalism. Salafi jihadist groups like Al Qaeda were not popular in the region. They still aren’t. They have been violently imposed on people thanks in large part to the actions of the US, which has a longstanding pattern of backing religious fundamentalists to further its geopolitical ambitions.

As far back as the 1950s, the CIA teamed up with the Muslim Brotherhood, then backed by Saudi Arabia, to weaken secular Arab nationalism and communism.

The most significant chapter in the US-Islamist love affair came in the 1980s, when the US armed the Mujahedeen to bleed the Soviet Union in Afghanistan. It was the largest and longest running covert operation in US history. People like Gulbuddin Hekmatyar, an Osama bin Laden associate whose claim to fame was splashing acid in the faces of unveiled schoolgirls at Kabul University, were the top recipients of CIA funds.

After the Soviet Union fell, the American-armed Mujahedeen groups morphed into Al Qaeda and the Taliban. Not long after that, Al Qaeda pulled off an attack that killed 3,000 people in New York City and its existence has been invoked to justify endless war and the curtailing of civil liberties ever since. (Afghanistan, where the US is still at war, remains the world’s second largest producer of refugees.)

The US played a similarly dirty game in Syria over the last six years. By knowingly arming rebel groups linked to Al Qaeda to weaken the Syrian government, the US created the world’s greatest refugee crisis since World War Two, which fueled the resurgent far right in the west and helped get Trump elected. I go into great detail about this topic in a recent piece I wrote for Alternet. Check it out here.

In September, during a private meeting at the state department, I expressed frustration about the US allowing Saudi Arabia to spread its toxic Wahhabi ideology, which serves as a primary inspiration for Salafi jihadist groups like Al Qaeda and ISIS, around the world. Before I could finish, a senior level official in the department of near eastern affairs interrupted me to defend the Saudis.

“Saudi Arabia isn’t exporting terrorism, they’re exporting religion and we can’t get into the business of policing religion. It’s a free speech issue,” said the official. “The Saudis are a very important geostrategic ally. And they are changing. They’ve worked very hard to reform their textbooks,” the official added.

The official then brought up the jihadist textbooks printed by the US and disseminated to Afghan school children in refugee camps in Pakistan in the 1980s. The textbooks encouraged violence against infidels, communists and the Soviet Union in the name of Islam and helped inculcate an entire generation. These US-printed textbooks can still be found in in Taliban-run schools today.

The senior state department official insisted that in the end printing them was “worth it” because “we got rid of the Soviet Union.”

The official’s response was reminiscent of former US National Security advisor Zbigniew Brzezinski, one of the architects of the US policy to arm the Afghan mujahedeen. Asked in 1998 if he regretted supporting Islamic fundamentalists, Brzezinski replied, “What is most important to the history of the world? The Taliban or the collapse of the Soviet empire? Some stirred-up Muslims or the liberation of central Europe and the end of the cold war?”

This sort of thinking continues to dominate the foreign policy establishment’s approach to the region with ever more disastrous consequences.

Rania Khalek is an independent journalist whose work has appeared at Truthout, Fairness and Accuracy in Reporting, Al Jazeera America, The Nation, Salon, AlterNet, Vice and more. She has recently been subject to terrible smears and attacks for refusing to go along with the mainstream media’s coverage of the Syrian conflict, exposing inconvenient truths about western-supported groups in Syria and fighting the propaganda push for more western intervention and bloodshed. After another recent attempt to silence her, a group of academics, journalists, activists wrote an open letter in her support. To support Rania’s journalism, you can contribute to her GoFundMe campaign or to her weekly podcast “Unauthorized Disclosure”.

Source: Dispatches from the Underclass