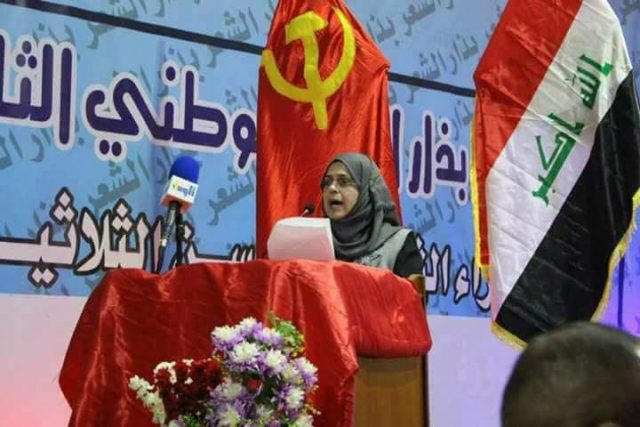 A women’s rights advocate and the journalist who threw his shoe at George W. Bush are among the leaders defining Iraq’s political future.

In one, Afghanistan, the Taliban has made significant gains in the western part of the country. It continues to bedevil the government in Kabul as well as the U.S. forces in the country. Parliamentary elections have not been held for three years. They have been set for October of this year, but will likely be postponed once more. No elections can be reasonably held in this climate.

In the other, Iraq, the parliamentary elections of May 12 appear to be won by the Sairoon (On the Move) list, which is headed by Muqtada al-Sadr. Al-Sadr used to be a familiar name in the West, when his forces—the Mahdi Army—routed U.S. troops in parts of Baghdad and elsewhere. The United States tried to assassinate al-Sadr on numerous occasions, but failed each time. Now, if he is allowed to win the election, he will be in charge of Iraq’s government.

Farah Province, at Afghanistan’s western border with Iran, has long been vulnerable to an assault by the Taliban. On Tuesday, Taliban fighters with heavy military equipment entered the center of the district headquarters. The Afghan National Army and U.S. air support slowed their progress, but could not stop it. The dash of the Taliban into the provincial capital came after months of heavy fighting in this rural and sparsely populated part of Afghanistan. This is also one of the avenues for the movement of opium from Helmand Province—also largely in Taliban hands—out of the country.

The United States—and its NATO allies—has been at war in Afghanistan since October 2001. None of the putative U.S. war aims have been met. The Taliban remains in power in large sections of Afghanistan, the central government in Kabul remains a puppet of its foreign backers and the Afghan people continue to suffer from the detritus of the warfare. Peace agreements are hinted at but not taken seriously.

The data on the brutality inflicted on the Afghan people is stunning. Half of the Afghan children are stunted. Twenty percent of Afghan women are underweight. Close to three-quarters of Afghans live in poverty in the rural areas. And less than 30 percent of Afghans can read. The condition of life now is—by some measures—worse than when the United States started to bomb the country.

Taliban attacks inside Kabul have remained consistent. Their fighters have been moving quite swiftly across the countryside. In the northern provinces of Faryab and Baghlan, the Taliban has made significant gains this week. Half the districts in the southern province of Helmand—the center of poppy cultivation—have been in the hands of the Taliban for about five years. In the southern part of Helmand, in Dishu and Khanashin districts, al-Qaeda fighters have built up training camps. They are areas that neither the Afghan National Army nor U.S. forces enter on a regular basis.

Parliamentary elections have not been held in Afghanistan for the past three years. In April, election authorities said that people in many provinces—such as Helmand—would not be able to vote due to the security situation. They had intended to hold these elections in July. They had to be postponed. Elections have been proposed for October. Will this election be a shell, with significant parts of the country out of the hands of the Kabul government? The political parties that dominate Kabul showed, during the presidential poll in 2014, the fragility of Afghan’s political system. The ballot box is not immune to violence, and the one with the gun is not merely the Taliban.

On May 12, the Iraqi people went to the polls—or at least a substantial number of them did so (44 percent). The verdict from the election surprised many people. The winning list was a coalition that has been in the works for the past several years. It includes the party of the cleric al-Sadr, the Iraqi Communist Party and the Iraqi Republican Party. This list—Sairoon—is also heir to the 2011 protests across Iraq against corruption and sectarianism and for a genuine democracy. Al-Sadr is remembered in Iraq not only for his militancy against the Americans, but also for his consistent criticism of graft and for the solidarity his largely Shia fighters showed for the largely Sunni combatants in Fallujah and Ramadi during the high-point of the anti-American insurgency.

The Sairoon list tapped into the popular level of frustration. Its winners included Suhad al-Khateeb, a communist, who won the parliamentary seat from Najaf—the most important town of Shia learning. To better understand the rootedness of both the reinvigorated communists and the Sairoon list, it is important to know that Suhad al-Khateeb is not only a woman, but that she wears a hijab. Al-Khateeb, a teacher, is known in Najaf for her genuine concerns for everyday problems of the precarious workers in urban areas such as Najaf. She is also a women’s rights advocate—unflinching before the more conservative theologians.

Muntadhar al-Zaidi is known for his act of defiance. In 2008, al-Zaidi threw his shoes at U.S. President George W. Bush during a press conference in Baghdad. Al-Zaidi was subsequently arrested, imprisoned and tortured. After his release from prison, al-Zaidi became—with his brother Uday—a fierce critic of corruption and sectarianism. Uday was a key leader of the Popular Movement to Save Iraq, which helped spawn the 2011 protest movement across the country. Muntadhar al-Zaidi, a journalist, ran for parliament on the Sairoon list. He won. Muntadhar al-Zaidi said during the campaign that no warlord money was in the coffers of his party. There is hope here.

Al-Sadr himself did not run for parliament. He cannot, therefore, be the prime minister. He will likely remain in the shadows. It suits him. Members of the Sairoon list say that their leader will be Ali Dawai Lazem, the governor of Maysan province. This province, to the south of Iraq, is deeply poor, but Ali Dawai Lazem is seen there as an honest man. He made his name on the national stage when he joined street cleaners at their job. There is no pretension about him. Many of those who have won on this list share that honesty.

The Sairoon Alliance is deeply skeptical of Iranian influence in Iraq (one of its slogans was “Arab Iraq”). But it is, at the same time, deeply anti-American. There is no doubt that al-Sadr remembers how he was physically hounded by the American forces, threatened with assassination, chased into Iran. People like Suhad al-Khateeb and Ali Dawai Lazem are rooted in the needs of the people, but they will have beside them people like Muntadhar al-Zaidi, whose shoes indicate the depth of hatred for America’s war on Iraq.

The power of the United States, so glibly used in its rush to war against Afghanistan and Iraq, seems weak. It drives an agenda in neither Afghanistan nor Iraq.

Meanwhile, across this region, the Chinese inaugurated a high-speed train from Bayannur (China’s Inner Mongolian Autonomous Region) to Tehran. The cargo on this train was sunflower seeds, which is symbolic for transformation and longevity. This train will link Iran to China. The route will continue through northern Iran into Turkey and perhaps into Iraq.

In Wuhan, China, the leaders of China (Xi Jinping) and India (Narendra Modi) had a long conversation this week. They spoke about a range of issues, including the Chinese-led Belt and Road Initiative that runs through Central Asia and links China to West Asia. Afghanistan was on the table, and so was Iran. India has been hostile to China’s moves in Asia. But this is incoherent hostility. India is the largest borrower from the Asian Infrastructure Investment Bank, an initiative that is part of the Chinese project for the continent. Rapprochement between China and India will clear the way less tension inside Afghanistan and for more unity over Iran and West Asia.

This is the new infrastructure of Asia. It is not being built by aerial bombardment, but by decent people such as Suhad al-Khateeb and Ali Dawai Lazem as well as by trains that carry goods and people across this vast continent.