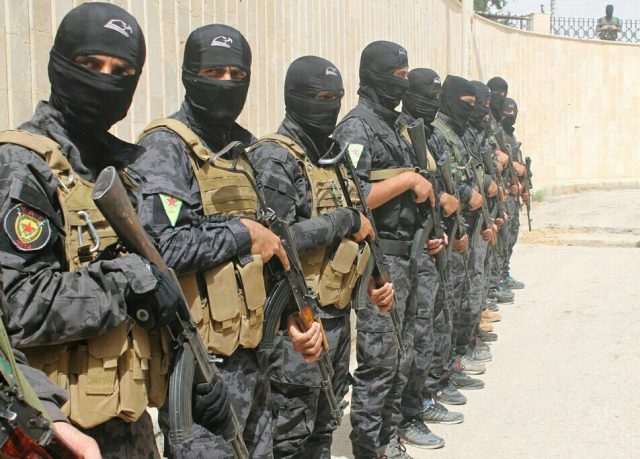 History shows that once their utility has been exhausted, they will be tossed in the scrap heap.

Ilham Ehmed, the co-president of the Syrian Democratic Council, sat down with Reuters in the Syrian city of Kobane. South of Kobane, 150 kilometers away in Raqq, Ehmed’s comrades in the Syrian Democratic Forces are in a pitched battle against ISIS. The SDF has been helped by ruthless bombardment from the skies by the United States, which has been pummeling military and civilian targets. Ehmed told Reuters that even after ISIS is removed from Raqqa, she hopes that the United States will remain engaged in Syria. “If the Americans want to protect the security of these areas and protect their own country from terrorism.” Ehmed said, “they must continue until a democratic system is built in Syria.”

Both the Obama and the Trump administrations understood that ISIS would not be defeated in Raqqa without ground forces. The United States can obliterate any target from the sky, but this does not win battles. Unwilling to place large numbers of US forces on the ground, the US had sought allies amongst the various Syrian fighting groups. The attempt by the US to manufacture a ‘vetted, moderate’ rebel group in Syria failed, despite the expense of millions of dollars. By 2014, after ISIS had been properly cemented in Raqqa, it appeared that no easy means lay before the United States to defeat it on the battlefield.

In late 2014, ISIS dashed north of Raqqa to the walls of Kobane, which they encircled. The Kurdish civilians and fighters who were trapped in the city were doomed. Turkey, which overlooks Kobane, closed its borders, sealing the city. It was at this point that the Iraqi Kurdish politicians put pressure on the United States and Turkey to allow some of their fighters to go through Turkey into Kobane. They also begged the US to bomb some of the hardened ISIS targets and to drop military supplies to the Kurdish militia, the People’s Protection Units (YPG). The combination of US aerial support and the fierce determination of the YPG fighters pushed ISIS back towards Raqqa.

It became clear to the US military and to US intelligence that the YPG would be a useful ground option for the eventual war against ISIS in Raqqa. But there was a problem here. The gains made by the YPG in northern Syria are along the Turkish border. Turkey was dismayed by this new alliance, particularly since it considers the YPG to be linked to the Kurdish Workers’ Party (PKK) – banned as a terrorist group in Turkey. The YPG was indeed trained by the PKK and the links between the Syrian Kurdish political leadership and their Turkish comrades is fairly strong. When the PKK founder and leader Abdullah Ocalan was in Syria, he interacted with and influenced many of the current leaders of the Syrian Democratic Council, including Ilhan Ehmed. Turkey strongly objected to what the US was doing, one of the reasons for the recent tension between Ankara and Washington.

The Syrian Kurdish leadership developed a theory that it was not exactly fighting to create an independent Kurdish state. The US was creating, the Syrian Kurdish leaders said in 2014, a new template for a federal Syria. Kurds ‘want a decentralized system in Syria,’ Ilhan Ehmed said earlier this year. ‘A decentralized system will grant the rights for all Syria’s peoples, and not only for the Kurds. All the peoples within the northern federation would govern themselves and discussions would take place under the shadow umbrella of a federal Syrian parliament. Such a system will unite Syria, and it will grant the rights of its peoples.’ To show that it is not merely a Kurdish force, the Kurdish militia became the Syrian Democratic Forces and the political outfit became the Syrian Democratic Council. Associations with Kurdish separatism vanished – although the flags of Kurdistan and Kurdish political emblems remain amongst the fighters and in the offices of the leadership. (US General Raymond Thomas, the head of Special Operations Command, recently said that it was the United States that urged the Kurds to ‘change your brand.’ When the Kurds said they could call themselves the Syrian Democratic Forces, Thomas noted, ‘I thought it was a stroke of brilliance to put democracy in there somewhere. But it gave them a little bit of credibility.’)

To bolster their strength, the Kurdish fighters—now as the Syrian Democratic Forces—welcomed 1,000 US Special Forces into Syria. In a recent interview, YPG Commander Sipan Hemo said that the United States has now built seven military bases in areas controlled by the SDF (and the YPG). One of these is a major airbase outside Kobane. These bases, of course, violate Syria’s sovereignty, which is why the United States is not keen to talk about them publically. The campaign against Raqqa began on June 6 of this year, with massive US bombardment of the city and the move through the villages around Raqqa by the SDF fighters.

Quick gains by the Syrian Democratic Forces worried Turkey. Its government sent troops into Syria to bolster Turkish allies along the north-western rim of the border. Turkey’s Deputy Prime Minister Numan Kurtulmus said that if the Syrian Kurdish forces move west of the Euphrates River between the towns of Azaz and Jarablus, then Turkey would ‘retaliate in kind.’ The leadership of Turkey’s proxy in the region, Liwa al-Mutasem, has also said that it would fight the Syrian Kurdish forces if they came near them. Mustafa Seraji, a leader of Liwa al-Mu’tasim, said that his soldiers are training with the Turkish army to ‘expel the extremist separatist militia,’ namely the Syrian Kurds.

Liwa al-Mu’tasim, a former Free Syrian Army group that was trained by the CIA, and the Turkish forces are planning to eject the Kurdish militias from the town of Tel Rifaat, which the Syrian Kurds seized in February 2016. About 150,000 refugees fled the town and its surrounding area. Many of them now live in the Sucu refugee camp in Turkey and in the Bab al-Salam refugee camp near the Turkish border. Serjani of Liwa al-Mu’tasim says talks with the SDF have failed and now only the gun remains. The Turkish military has begun to shell SDF positions, which have retaliated with their own artillery. Matters are tense. Tel Rifaat is only 20 kilometers from Turkey. It remains a serious flashpoint.

The United States has tried to calm Turkey by saying it has armed the SDF only for the conflict in Raqqa. The weapons will be handed back, say the Americans, once ISIS is defeated. Turkey’s Kurtulmus scoffs at this. The United States has produced a ‘small army,’ he says, and no armed force once given weapons is going to return them. He has a point. This is why Ilham Ehmed of the Syrian Democratic Council is not keen to see the US leave the area once Raqqa is taken from ISIS.

Ehmed need not worry. The US has no plans to withdraw.

Across the border in Iraq, the Kurdish ruling party in the north has called for an independence referendum for September 25. The Kurdish enclave, effectively an American protectorate, had attempted a similar political move in 2014. They postponed it because of the rise of ISIS. Now that the Iraqi forces—with Iranian and US support—have dispatched ISIS from Mosul, the question of Kurdish independence is back on the table. The US Special Presidential Envoy Brett McGurk has urged the Iraqi Kurds not to hold the vote. He fears that it would distract from the anti-ISIS battles. Iraq’s Prime Minister Haider al-Abadi said that he would not ‘deploy tanks’ to squelch the referendum. This is a veiled threat.

Turkish troops sit ready to crush the emergence of a Syrian Kurdish enclave, while Iraqi forces could very well intervene to prevent the independence of Iraqi Kurdistan. The United States is equally opposed to any assertion of Kurdish independence. It is merely using the Kurds, both in Iraq and Syria, for its own ends. Suffocated options have driven the Syrian Kurds into the American orbit. They have their own agenda: to ensure the growth of Syrian Kurdish power. Whether they will succeed by using the Americans is a serious question. History shows us that once their utility has been exhausted, they will be tossed in the scrap heap.

Vijay Prashad is professor of international studies at Trinity College in Hartford, Connecticut. He is the author of 18 books, including Arab Spring, Libyan Winter(AK Press, 2012), The Poorer Nations: A Possible History of the Global South(Verso, 2013) and The Death of a Nation and the Future of the Arab Revolution(University of California Press, 2016). His columns appear at AlterNet every Wednesday.