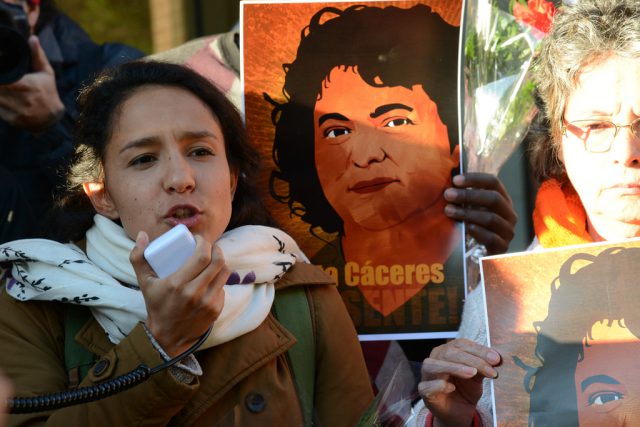 This week, hundreds of people are gathered in the small town of La Esperanza in Honduras to remember the extraordinary life of Berta Cáceres, brutally cut short one year ago by a death squad that included U.S.-trained security agents.

During her short time on Earth, Cáceres was a powerful leader involved in many struggles. She led protests against corporate-driven regional trade agreements. She was a key figure in the broad-based movement of peaceful resistance to the 2009 military coup that deposed Honduras’s democratically elected president. Later, she was an outspoken critic of the U.S.-backed militarization of Honduras that rapidly expanded after the coup.

Internationally, Cáceres gained fame for her relentless fight against the illegal appropriation of indigenous lands by corporations seeking access to valuable natural resources with no regard for local peoples or the environment. Her tireless efforts to block the Agua Zarca hydroelectric dam project on Lenca indigenous land earned her the prestigious Goldman Environmental Prize in 2015.

It also led to an escalation of death threats and attacks against her and her colleagues at the Civic Council of Popular and Indigenous Organizations of Honduras (COPINH).

In the middle of the night on March 2, 2016, Cáceres was gunned down at her home in La Esperanza in a commando-style operation. The assassination of the country’s most renowned activist generated shockwaves throughout Honduras and the world; countless protests and vigils were held, and a broad array of groups demanded justice, including the Inter-American Commission on Human Rights (IACHR), the Vatican and dozens of U.S. members of Congress.

An appalling number of activists have been killed in Honduras in the years since the 2009 coup, and nearly all of those killings have gone unpunished. Following Cáceres’s murder, the Honduran government — which receives tens of millions of dollars of U.S. assistance every year — has been under enormous pressure to properly investigate Cáceres’s killing, to protect activists and to clean up its corrupt, crime-ridden institutions.

But one year has passed and the distressing reality is that the situation in Honduras is more alarming than ever.

In the case of Cáceres’s assassination, Honduran police spokespeople initially followed their usual playbook in dealing with an activist killing, first suggesting that Cáceres was either murdered by a former lover or by a burglar attempting to rob her home.

Then, bowing to international uproar, authorities proceeded with an investigation that, while deeply flawed, eventually led to eight suspects being arrested and charged with Cáceres’s murder. At least three of the suspects were active or former members of the Honduran military, and another was a senior manager at DESA, the company responsible for the Agua Zarca project.

Honduran authorities have denied any role in Cáceres’s killing, but court records obtained by reporter Nina Lakhani for The Guardian indicate that one of the suspects, Major Mariano Díaz, had been appointed chief of military intelligence two years ago.

Díaz, as well as another suspect in Cáceres’s killing who served in the military with him, had both received U.S. military training, according to Lakhani. She also notes that the president of DESA, Roberto David Castillo Mejía, is a former military intelligence officer.

There is strong evidence that the eight suspects were involved in a murder conspiracy bearing the characteristics of a paramilitary death squad operation. It is, however, highly doubtful that the group acted autonomously or that it included any of the intellectual authors that commissioned the murder.

It is likely that those ultimately responsible for Cáceres’s killing are safely perched at the top of Honduras’ social and political ladder, beyond the reach of the country’s weak and politically compromised judiciary.

A January 2017 report by Global Witness examined Cáceres’s assassination and other killings and attacks targeting environmental and indigenous activists and found that these ventures typically involve the country’s economic and political elites, and frequently involve state security forces, which receive U.S. support.

While the commission has removed many alleged criminals from the force, none of the purged officers has had to face judicial accountability, leaving them free to continue their criminal activities elsewhere — including within the booming and murky private-security sector. Furthermore, the purge has left in place a number of senior officers publicly known to be facing criminal allegations.

More importantly, neither the police commission nor the much-touted Mission to Support the Fight against Corruption and Impunity in Honduras (MACCIH, by its Spanish initials) has had any real impact on the situation on the ground.

Activists continue to be killed with impunity, including two more members of COPINH who, like Cáceres, had been granted protective measures by the IACHR, which the Honduran state had failed to enforce.

Illegal appropriations of indigenous land are still underway, and corruption and criminality still permeate the Honduran government at the highest levels. The Honduran judiciary has failed to investigate senior officials from the ruling National Party, including President Hernández, despite reports of the diversion of public money from the country’s Institute of Social Security to the coffers of the party and the president’s campaign fund.

Yet the U.S. government continues to pour tens of millions of dollars of aid into Honduras. Much of it is in the form of security assistance, channeled through the opaque Central America Regional Security Initiative, despite evidence of links between police and military units and death squads, such as the one that killed Cáceres.

The man in charge of these security forces, retired Gen. Julian Pacheco Tinoco, was recently identified as a drug trafficker by a U.S. Drug Enforcement Administration informant in the course of a trial involving the nephews of the first lady of Venezuela. But that hasn’t deterred the U.S. government, which appears to prioritize shoring up a reliable ally over protecting human lives.

Despite all the horrifying news out of Honduras, last fall the State Department went ahead and certified the Honduran government’s compliance with human rights conditions attached to U.S. aid. But, stirred in part by Cáceres’s killing, an increasing number of members of Congress are publicly opposing the U.S.’s Honduras policy.

This week, Rep. Hank Johnson (D-Ga.) and other members of Congress are reintroducing the Berta Cáceres Human Rights in Honduras Act, which calls for full suspension of security assistance to Honduras so long as minimal human rights conditions aren’t met.

Berta Cáceres may no longer be with us physically, but her indomitable spirit lives on, and her struggle continues. As thousands chant in La Esperanza and far beyond: “¡Berta Vive, la lucha sigue!”

Alexander Main is senior associate for international policy at the Center for Economic and Policy Research in Washington.

Cover photo: Berta Zuñiga, daughter of Berta Cáceres, speaking in a vigil in front of the OAS (photo by Daniel Cima)