A Tale of Two Summits 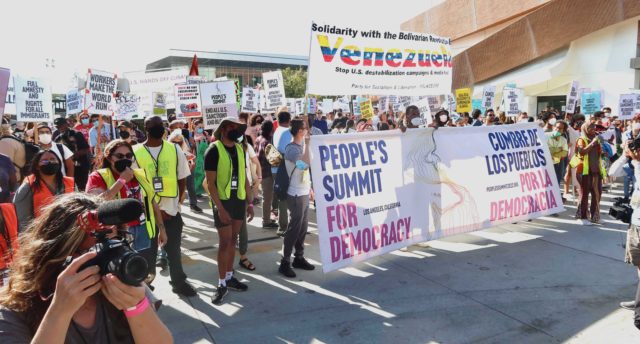 Last week (June 8-10) there were two summits in Los Angeles, California: the Summit of the Americas hosted by the US State Department and the People’s Summit hosted by US and international activist organizations. The two summits were held in the same city at the same time but could not be otherwise more different. 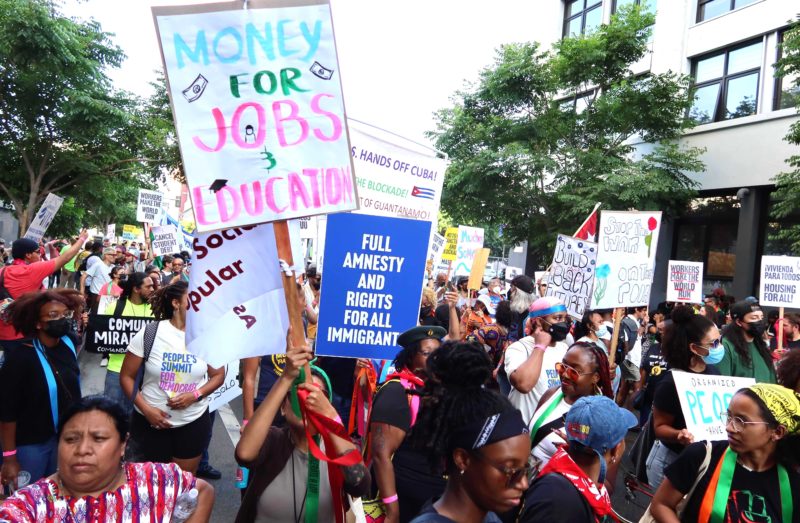 June 10 march on the streets of LA.

Summit of SOME of the Americas

Begun in 1994, in the heyday of US international dominance, the Summit of the Americas is officially a function of the Organization of American States. It is meant to coordinate and consolidate US economic, political and cultural interests. The first summit, held in Miami, served this goal well. The Soviet Union had broken up, severely hurting allies such as Cuba. Neo-liberalism was on the march, even in countries such as Nicaragua where the Sandinistas had been voted out of power. The US had recently invaded Panama, making an murderous example of any country or leader that defied US dictates.

Since 1994, there have been Summits of the Americas every three or four years. The summits in Canada (2001) and Argentina (2005) had large anti-summit protests against capitalist globalization. In Panama in 2015, Cuba was invited to the summit for the first time after a group of countries threatened to boycott the summit if Cuba was again excluded. President Obama met and shook hands with Cuban President Raul Castro. There was widespread agreement and pleasure at the US beginning to normalize relations with Cuba.

In 2018, the US hostility to Cuba resumed under President Trump. The White House administration referred to Cuba, Nicaragua, and Venezuela as a “troika of tyranny”.

The policy of exclusion continues under the Biden administration and this became a major feature of the just concluded Summit of the Americas. Despite threats to boycott the gathering by many Latin American and Caribbean presidents, the US chose to exclude Cuban, Nicaragua and Venezuela. This resulted in seven country presidents choosing not to attend: Mexico, Bolivia, Honduras, St Vincent, Antigua, Guatemala, El Salvador. Mexican President Andres Manuel Lopez Obrador (AMLO) said simply, “There cannot be a summit of the Americas if all the countries of the American continent do not participate. Or there can be, but …. it is just a continuation of the old policy of interventionism, or disrespect of nations and their peoples.”

As it turned out, the absence of three excluded and seven allied leaders became a predominant feature of the Summit. The ghost of the ten hung over all events. The summit accomplished little with the lack of preparation being compared to a “privileged but lazy student” who does not prepare for a test. The Atlantic analyzed the situation: “The Summit of the Americas, hosted this year by Joe Biden, offers a measure of how far the U.S. has fallen.” The attendance was small and resolutions filled with platitudes with little substance. Criticisms of the US exclusion of countries were openly aired.

The NY Times described the Summit by quoting a former Mexican ambassador who said many countries are “challenging U.S. influence, because U.S. influence has been diminishing in the continent.”

At the Summit of the Americas, Secretary of State Antony Blinken and OAS leader Luis Almagro spoke at a panel about ” Journalistic Freedom”. Journalist Walter Smolarek exposed the farce as he boldly confronted Almagro because of his complicity in the 2019 Bolivian coup and more.

There was a plea from many countries to get beyond conflict and cold war, to genuinely work together to address the looming and already dangerous results of climate change.

The Summit of the Americas was expensive. Just the LA police security cost over $15 million. 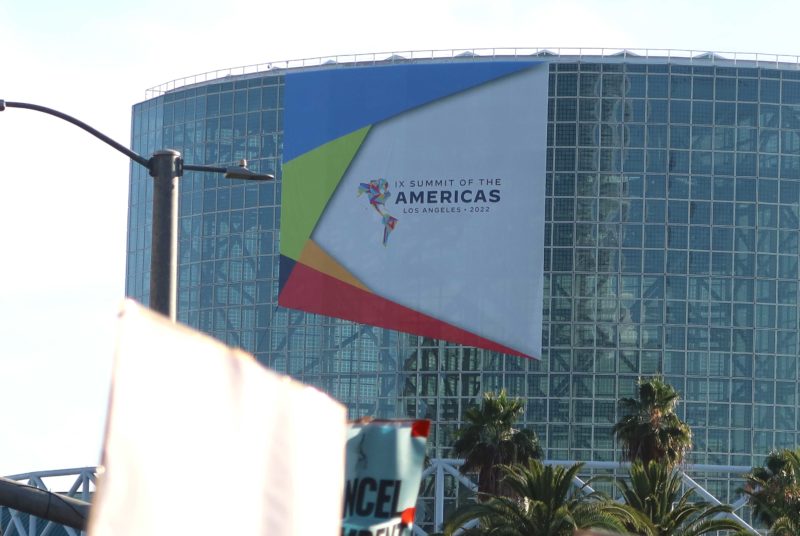 Summit of the Americas venue.

Two miles away from the Summit of the Americas, the People’s Summit was held at the Los Angeles Technical Trade College. The Peoples Summit included art and poster pavilion, a huge hall for panel discussions and speeches, and an outdoor pavilion featuring dozens of activist organizations and craftspeople. There was live music and dancing later at night. Over a thousand people attended and spirits were high.

The complex affair was organized by over ten convening organizations. These included the Answer Coalition, International People’s Assembly, CodePink and unions SEIU 721 and AFT 1521. There were over a hundred individuals providing support and organization for the event. Many activists flew or drove to Los Angeles from across the US. In contrast with the Summit of the Americas , the People’s Summit operated on a shoestring based on volunteers.

A wide array of domestic and international issues were addressed at the People’s Summit. They included Health as a Human Right, Gender Violence, Food Sovereignty and Climate Justice, Cultural Resistance, Youth Organizing Strategies, Justice for TPS and Undocumented Community, Lessons from Below and Organizing Unhoused Communities. Plus many more.

In 2020, Los Angeles counted over 66,000 homeless people in the city. The latest survey, from January this year, is going to be released June 22. These and other issues were explored by activists at the People’s Summit.

A major component of the People’s Summit was international affairs and the connection to struggles at home. While the US spends well over $800 billion annually on the military, there are virtually no homes being built by the US government. The US Department of Housing and Urban Development offers rental assistance and advice. In contrast, Venezuela has constructed 4 million homes for Venezuelan families.

US censorship and attacks on media critics were further revealed at the People’s Summit where Julian Assange’s father and brother talked about the world’s most famous imprisoned journalist and publisher. The Wikileaks founder has been imprisoned for ten years, with over three years at Belmarsh maximum security prison. He is now threatened with extradition to the US, a kangaroo court and life imprisonment. His only “crime” has been to reveal the real crimes of the US military and government.

There was an outstanding lineup of speakers each of the three days of the People’s Summit. These included local activists and indigenous leaders and noted international leaders such as Honduran Bertha Zuniga and Puerto Rican Oscar Lopez Rivera.

The presidents of Cuba and Venezuela, plus Evo Morales, the former president of Bolivia, sent eloquent messages of support to the People’s Summit.

On Friday June 10 there was a mass march and rally from the People’s Summit at the community college to the street in front of the Summit of the Americas. The streets of downtown Los Angeles echoed with calls, chats and songs as the march proceeded. 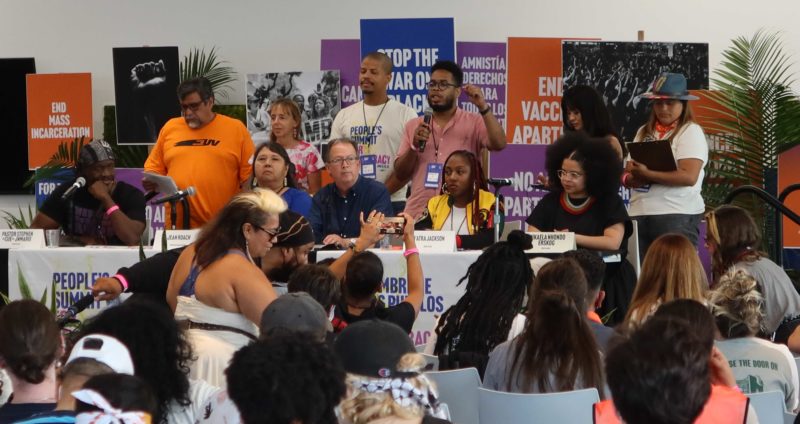 Closing panel at the People’s Summit.

There is growing criticism of US presumptions of supremacy and US foreign policy promoting division and conflict. This was expressed by leaders who stayed away from the Summit of Americas and also many leaders who attended. The Prime Minister of Barbados, Mia Amor Mottley, said frankly,

“It’s wrong that Cuba and Venezuela and Nicaragua are not here, because as you heard from Bahamas, we need to speak with those with whom we disagree….There’s too much narrow-casting instead of broadcasting. There’s too much talking at, instead of talking with…. And the simple priority must be people, not ideology.”

US exceptionalism and the exclusion of countries is increasingly being challenged. This matches the global criticisms of US unilateral sanctions. At the last UN General Assembly, the vote was 184-2 in denouncing US embargo on Cuba. Seventy percent of world nations believes US sanctions violate international law.

The Summit of the Americas showed the US attempting and failing to impose its will on the hemisphere. The People’s Summit showed a different vision which is in accord with the wishes of most countries and people. 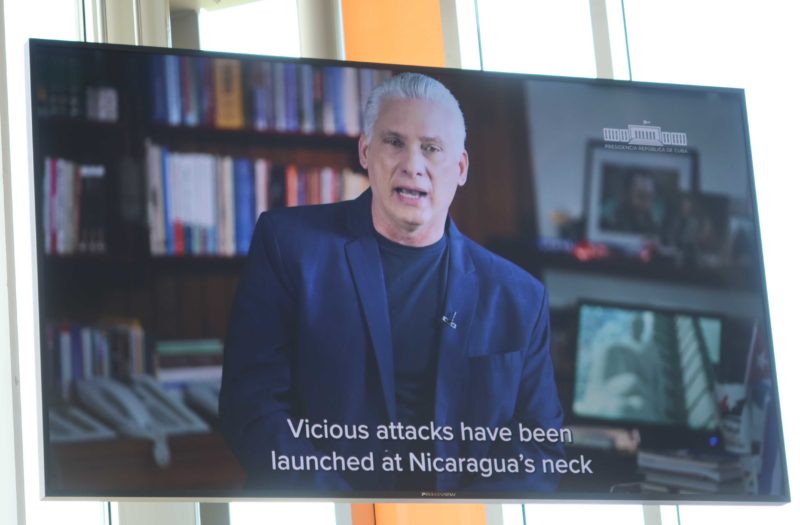 Message to the People’s Summit from Cuban President Miguel Díaz-Canel.

Rick Sterling is an independent journalist based in the SF Bay Area. He can be reached at rsterling1@gmail.com

All photos by Rick Sterling