A Million Children on the Verge of Death by Cholera—Will Anyone Lift a Finger? 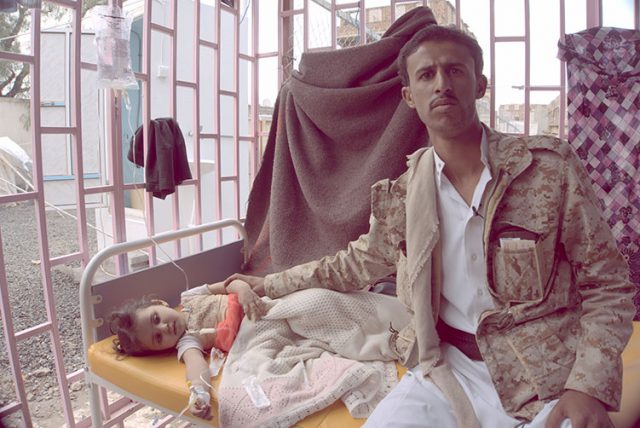 These deaths are not tragedies, they are crimes.

Last Thursday [July 27], the head of the UN Children’s Agency (UNICEF), Anthony Lake, arrived in Amman, Jordan after a heart-wrenching tour of war-ravaged Yemen. ‘Stop the war,’ said Lake. It was a clear message. No subtlety was needed. ‘All of us,’ he said, ‘should feel ‘immense pity, even agony, for all of those children and others who are suffering, and they should feel anger, anger that this, our generation, is scarred by the irresponsibility of governments and others to allow these things to be happening.’

Lake’s message has gone unheeded. As is the voice of all those who have tried to raise discussion of the atrocity done to Yemen. Last night, the charity group Save the Children raised the alarm once more. In a brief report, Save the Children said that more than a million children who suffer from acute malnutrition live in the areas where cholera has swept the country.

‘After two years of armed conflict,’ said Tamer Kirolos, Save the Children’s country director for Yemen, ‘children are trapped in a brutal cycle of starvation and sickness. And it’s simply unacceptable.’ Kirolos’ teams in the hardest hit areas find ‘a horrific scenario of babies and young children who are not only malnourished but also infected with cholera.’ The combination is deadly. What lies ahead is apocalyptic: mass deaths of children from a combination of hunger and disease.

In June, UNICEF reported that a Yemeni child dies every 10 minutes. These deaths are not tragedies. They are crimes.

The war in Yemen, prosecuted by Saudi Arabia and its allies and backed with weaponry from the West, has destroyed the country’s food, water and health infrastructure. In January 2016, Saudi aircraft bombed a water desalination plant north of al-Mocha. This bombing run, which lasted minutes, left the million residents of the Yemeni city of Taiz without water. Piped water is no longer an option for most Yemenis. They rely upon water tankers; this water has become more expensive as fuel prices have skyrocketed. Last month, Gabriel Sánchez of Doctors Without Borders (MSF) in Yemen said that in one district, ‘our teams are seeing an extremely poor sanitation situation and insufficient access to clean drinking water.’ Absence of clean drinking water has helped fuel the cholera epidemic which broke out this March.

Aid groups, from the UN and elsewhere, as well as citizens groups across Yemen have tried to address the crisis, but the scale of this human-made disaster is enormous. Four out of five children in Yemen need some humanitarian aid. No aid agency can solve this crisis if the war continues – particularly if the fragile infrastructure continues to be bombed and if repair of this infrastructure continues to be prevented. Saudi Arabia has blockaded this country and bombed its main port. This has not only hampered the work of charity groups, but it has also meant much needed supplies for repair have cannot reach Yemen. The country is being isolated into desolation.

On Tuesday, the country director for Yemen of the UN Development Agency (UNDP) Auke Lootsma said that 60 per  cent of Yemen’s population does not know where their next meal will come from. Lootsma, who is based in Sanaa (Yemen), spoke to reporters via a videoconference. Save the Children said that a million children are near death by cholera. Lootsma offered double the figure. ‘We expect the cholera outbreak to continue to wreak havoc despite the best efforts of the UN agencies’, he said. Over 90 per cent of Yemen’s food is imported. With a combination of Saudi Arabia’s blockade, depleted foreign exchange reserves and poverty in the country, food is out of the reach of families. Yemen, Lootsma said chillingly, ‘is like a bus racing towards the end of a cliff.’

Terrible stories come from the edge of the cliff, including that desperate Yemeni families have begun to sell their children for food. When the UN’s coordinator for emergency aid, Stephen O’Brien, came to brief the UN Security Council in May, he said, ‘Families are increasingly marrying off their young daughters to have someone else care for them, and often use the dowry to pay for necessities.’ Such survival tactics, on the backs of children, will have a long-term impact on Yemeni society. This war is driving people to great barbarity.

Saudi Arabia’s war aims can never be met in Yemen. That is now clear. It simply cannot bomb the country into submission and it does not have the ground forces to enter Yemen and defeat the various rebel groups that defy it. An attempt to get the Pakistani military to enter the conflict on its side failed in 2015 when the Pakistani parliament took a neutral position on the war. In March of this year, the Pakistanis sent a brigade to defend Saudi Arabia’s southern border. This shows that Saudi Arabia, by far the best equipped military power in this conflict, now fears the war will move northward into its own territory. Yemeni rebels have fired crude scud missiles into Saudi Arabia and at both Saudi and Emirati ships that enter Yemen’s coastal waters. These attacks—one against an Emirati ship yesterday—show that defeat of Yemen’s resistance to Saudi Arabia is not on the cards.

Meanwhile in the Hadhramawt region of Yemen, al-Qaeda in the Arabia Peninsula (AQAP) continues to make gains. In February, the International Crisis Group released a report that said that AQAP ‘is stronger than it has ever been.’ AQAP and its allies have become indispensable to the Saudi air war, providing crucial ground troops in Aden and elsewhere. Fighting units such as Humat al-Qidah and al-Hassam Brigade are well-supplied by the UAE and Saudi Arabia to protect Aden. They are direct beneficiaries of this war. The Crisis Group suggests that AQAP ‘is thriving in an environment of state collapse, growing sectarianism, shifting alliances, security vacuums and a burgeoning war economy. Reversing this trend requires ending this conflict that set it in motion.’ The point about state collapse is important. 1.2 million Yemeni civil servants have not been paid since September 2016.

Meanwhile, the West continues to sell arms to Saudi Arabia and the UAE, offering these arms sales as a way to sanctify the war. The West with these sales is utterly complicit in the Saudi-led war.

The West’s complicity extends to the manner in which it has allowed Saudi Arabia to yoke this obscene war with its paranoia about Iran. Saudi Arabia argues that the rebel Houthi group in Yemen is a proxy of Iran and that Houthi capture of Yemen cannot be permitted. It is the impetus for this war. What is needed, however, is not a war to destroy Yemen, but the opening of a serious process for Saudi Arabia and Iran to talk about their broad disagreements.

In Istanbul, during an emergency meeting of the Organisation of Islamic Cooperation around Israel’s actions in Jerusalem, the foreign ministers of Saudi Arabia and Iran shook hands and spoke for a few minutes. Adel al-Jubeir (Saudi Arabia) and Javad Zarif (Iran) later offered warm words about their meeting. These are little gestures. But they need to be magnified. Tensions between Saudi Arabia and Iran not only fuel the war on Yemen, but also the war on Syria. They will certainly be a major factor in October when US President Trump has to offer his recertification of the nuclear deal with Iran. If the US goes to war against Iran, it will partly be because of Saudi pressure to do so.

How to prevent the atrocity that is taking place in Yemen? The war must end. That is now a consensus position among the humanitarian community. Arms sales by the West must be stopped. Pressure for a grand bargain between Saudi Arabia and Iran must increase. A million to two million Yemeni children’s lives are stake.

Vijay Prashad is professor of international studies at Trinity College in Hartford, Connecticut. He is the author of 18 books, including Arab Spring, Libyan Winter(AK Press, 2012), The Poorer Nations: A Possible History of the Global South(Verso, 2013) and The Death of a Nation and the Future of the Arab Revolution (University of California Press, 2016). His columns appear at AlterNet every Wednesday.