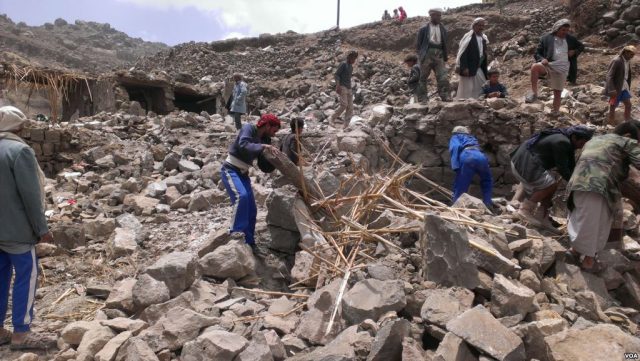 “The people of Yemen are in desperate need of signs that this war will soon end.”

On April 3, the UN Secretary-General António Guterres put down a clear marker before a conference to raise money for Yemen: “Yemen is the world’s worst humanitarian crisis.”

There is a great deal of competition. South Sudanese refugees spill over into all of East Africa and toward Europe, while Myanmar’s Rohingya refugees flood into Bangladesh. Syria’s unending and unforgiving war continues to break the back of that country’s people. Islands vanish in the South Seas, while farmland withdraws in the Sahel. Hunger and war compete with each other for the tears of human beings.

And yet, the UN’s Guterres is right. The numbers for Yemen—with a pre-war population of about 27 million people—are shocking. Twenty-two million people, namely 80 percent of the population, need humanitarian aid. They will die without it.

For example, 18 million people have little access to food, one more million than a year ago. Eight and a half million people do not know where they will get their next meal. Every ten minutes, a Yemeni child dies of a preventable cause. Malnutrition and disease—including cholera—compete to kill human beings.

None of this is caused by something insurmountable. It is true that Yemen is a country of great poverty. In 2017, just under half the population of Yemen was below the poverty threshold. Today, 79 percent of the population is in poverty.

Schools are closed. Hospitals have been bombed. The country is under virtual siege, and humanitarian aid has a hard time entering Yemen’s seaports and airports.

Yemen is seized by an ugly war.

The war that is ongoing began in 2015 when Saudi Arabia attacked the country on behalf of its allies—namely the former president Abdrabbuh Mansur Hadi, whose mandate expired in 2014. The Saudi war, backed fully by the United States, France and the United Kingdom, has been ghastly—destroying the country with no strategic objectives met and none on the horizon.

There is no expectation of placing Hadi back in power. He has little credibility within Yemen. Hadi, who lives in Riyadh (Saudi Arabia), has been sentenced to death by a court in Yemen’s capital of Sanaa. In late 2017, it was said that Hadi was being held in house arrest by the Saudi authorities. The Saudis occasionally allow Hadi to attend various Arab summits, where he parrots the Saudi position.

But the war has a much earlier history, one that goes back to the unsettled consensus during the uprising of 2011 that overthrew the long-standing government of Ali Abdullah Saleh. Various groups jockeyed for power in the aftermath of Saleh’s departure in 2012. All kinds of agreements were made, but none have been honored. The Zaidi community—known as the Houthis—had formed the Ansar Allah movement in the 1990s. They had sought political power for their largely impoverished community that is mainly found in the mountains of Yemen’s north, which is on Saudi Arabia’s border. The Houthis led the struggle to reinstate fuel subsidies in the aftermath of Saleh’s fall. It was this campaign that drew them to the center of political power and eventually to control of substantial parts of Yemen. They are the main enemies of Saudi Arabia’s war.

Saudi Arabia is largely motivated by crass sectarianism—the Houthis or Zaidis being a Shi’a sect, although one close to the school of Hanafi Sunni Islam. Angry Saudi statements about the Houthis being proxies of Iran remain in the realm of fantasy.

Meanwhile, the Saudis remain unfazed by the growth of al-Qaeda in the Arabian Peninsula, which continues to hold territory in Yemen’s Hadramaut region. The al-Qaeda fighters have been attacking Yemeni bases in that region, including those Yemenis who are backed by Saudi Arabia and the United Arab Emirates (UAE). In late March, al-Qaeda fighters killed twelve Yemeni soldiers at a UAE-run military base in Mukalla.

Saudi bombing runs have regularly hit civilians. Last Sunday, a Saudi air strike hit a wedding party in Hajjah, northwest Yemen, killing at least 20 civilians. In another incident this week, cars were hit by Saudi bombs in Taiz, southwest of Yemen, killing 20 civilians. Each of these attacks reminds Yemenis of the ghastly toll of this war. About 10,000 people have died in this war already, with at least 2 million civilians internally displaced. The number of those displaced is likely very conservative.

End of the War?

Recently, the UN Special Envoy for Yemen—Ould Cheikh Ahmed (Mauritania)—resigned his post. He said that the negotiations have been futile. There is no sign of any real dialogue, no sign of the abatement of violence.

In his place, the UN has appointed Martin Griffiths (Britain), a veteran diplomat. After a month on the job, Griffiths went before the UN Security Council on April 17 with the hope that he can put a new peace plan on the table within two months. “The people of Yemen,” Griffiths told the UN Security Council, “are in desperate need of signs that this war will soon end.”

Griffiths knows a hopeless task when he sees one. Between 2012 and 2014, Griffiths was the adviser to three Special Envoys of the UN Secretary-General for Syria, and he served as the Deputy Head of the UN Supervision Mission in Syria.

Already, Griffiths noted, there are troop movements across Yemen that suggest more combat, Saudi aircraft continue to fire on Yemen, and Yemeni forces continue to fire ballistic missiles at Riyadh. None of this is going to cease, making any peace framework difficult to forge.

There is no pressure on Saudi Arabia to halt its bombing runs. France, the United Kingdom and the United States continue to sanction vast arms sales to Saudi Arabia. The red-carpet welcome to Saudi Crown Prince Prince Mohammed bin Salman—the architect of the failed Saudi war on Yemen—shows that there is no appetite in Western capitals to cross the Saudis.

The scandal of this war is the carte blanche given by the West to the Saudis, who have experienced no pressure to end their murderous campaign.

Griffiths’ warning about armed action scuttling the possibility of war had not long to wait. On April 23, a Saudi strike assassinated Saleh al-Samad, head of the Houthi Supreme Political Council. The leader of the Houthis—Abdul Malik al-Houthi—said that this assassination would have serious consequences. “This crime will not pass without consequences,” he said, “nor other crimes like the targeting of the wedding in Hajjah province.”

Samad was a crucial person. He was appointed by the Houthis in 2014 to be the adviser to then-president Hadi in a unity government. Samad, who had great legitimacy in the Houthi circles, was willing to reach out to Hadi to circumvent a war. In fact, in November 2014, Samad fought off criticism in the Houthi Supreme Political Council to defend Hadi’s cabinet appointments. This is the kind of temperament that would have been helpful to Griffiths. But now the death of Samad might set the political clock back.

The spin behind Saudi Arabia’s ‘humanitarian aid plan’ for Yemen