200,000 Protest against the WTO and Macri’s Neoliberal “Reforms” 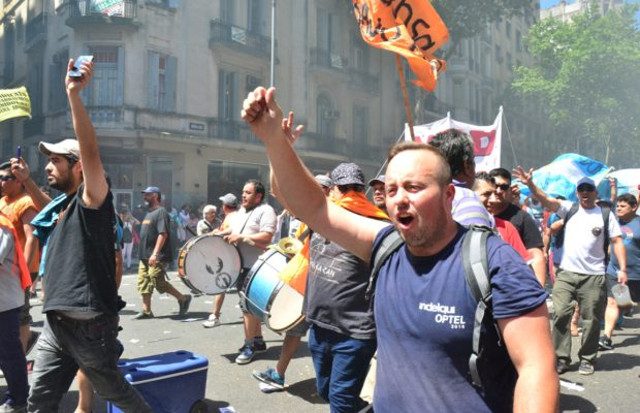 Carlos Aznarez writes on the protests raging on in Argentina against Macri’s neoliberal reforms, and the police repression seen in response. (Note: this article was written on December 15)

It was a day of fury against the institutional tyranny imposed by President Mauricio Macri when just 72 hours before, the city of Buenos Aires had been invaded by thousands of military soldiers, naval officers and the national police wearing various uniforms, all of them heavily armed, and purposefully threatening. The excuse was to defend the interests of the guests of the World Trade Organization that was meeting in the city.

On Tuesday a march took place against the WTO, that institution that secures looting for the richest countries and legalizes their vast accumulation of wealth, that resulted in a tide of repression and many arrests.

And then there was Wednesday when 200,000 protesters from social organizations occupied the downtown screaming against the WTO but also against Macri’s “reforms”. A neoliberal adjustment, ranging from stealing money from the funds of retirees to bringing labor laws back from the era of the dictatorship, when then minister of Economy, Martínez de Hoz wrote the script that was repeated in 2001 (with the Minister Domingo Cavallo) and now is being revived again by Macri and his right-wing combo.

At the end of this great mobilization, the national police (the same force that killed Santiago Maldonado in Patagonia) carried out some heavy repression against thousands of people who tried to reach the Congress. That was the prelude of what would happen next on Thursday. On that same day the government, in a shameful maneuver, trying to push a parliamentary call forward on a provisional reform law aimed at the elderly. Basically they were trying to take away the miserable retirement compensation from older men and women who had worked for it their entire lives.

From the dawn of D day the Congress was surrounded by hundreds of national police, naval cadets (the same ones who killed the Mapuche Rafael Nahuel), and policemen in uniform and more who were undercover. They were barricaded behind metal fences brandishing weapons in the most menacing way possible. Macri’s Cambiemos coalition was prepared for war after realizing that a massive mobilization of the people was under way.

The Parliament appeared locked down and kidnapped by military forces that harkened back to those nefarious days where a state of siege was almost a custom. The building was so rigorously controlled that even some members of congress who were trying to gain access were beaten and pepper sprayed without any distinction. The treachery took place for all to see in broad daylight.

In the face of this deployment of brute force stood the people. The women and men on foot, workers, students, thousands and thousands of militants of social movements, defending with their body the demand that the shameful law would not pass.

That is why it is clear that what happened this Thursday will add another page to the history of Argentinean resistance and the fight against a government that despises its people. It was once again the historical wrestling between life and death, represented by this rotting capitalist system that never stops at all in its journey to plunder even the most vulnerable.

In response to multitudes that were peacefully protesting, their answer was overwhelmingly and intimidating. The repressive forces tried to impose “discipline” with bullets and trying to make sure there were no insubordinates. It is like they forgot, perhaps because they live locked in their gated luxury mansions, what the people are capable of.

It must be remembered that this is a people who resisted one of the most brutal dictatorships on the continent and then continued to fight against successive bourgeois democracies that ended up destroying what little that the military had left standing. From that time, from the strength of conviction for a just cause it is hard to understand just how much brutal repression was endured. And here they were having to endure even more like those days of 2001 when the national police, deranged by hatred, gunned down the crowd for hours, throwing canister after canister of tear gas with acid and pepper at everyone who crossed their shameful path. This time they were facing Macri’s totally crazed bulldogs who beat women and teenagers, shooting journalists and photographers, stopping random bystanders or homeless people. Not only could it be said they did it with impunity but they seemed to enjoy the pain and panic they generated by their repeated attacks.

However, the popular resistance gave yet another example of courage, when thousands of young people who had been dispersed then replanted themselves stoically in front of the fences in a square flooded with gas and the smoke of containers of burning garbage. Meanwhile inside the Parliament the opposition miraculously pulled together the necessary support and pressure to adjourn the session and at least for now the passage of the law against the elderly was left on the table.

When the news made it out the square burst into cheers. Thousands of voices joined in a cry that defines the urgency that emerges in these difficult circumstances: “Unity of the workers.” Fraternal and watery hugs in the midst of more gas and rubber bullets, smiles of satisfaction for having linked their arms, if even momentarily, against those who represent the most sinister aspect of a society.

Nobody else except that crowd that stood  strong on the street should get the recognition of merit for having achieved this little victory in a war declared against them by the powerful and that will regroup and continue, no doubt. The Prussian government guard, from their rancor and malignancy continued for several more hours its “combat”, hitting, beating viciously and imprisoning those who they could catch. These guys will never change. They are akin to those that we’ve recently seen in Honduras, in Brazil, in Barcelona or in Palestine. They are prepared for this sad task, encouraged and protected, in this case by a security minister who has exceeded all her limits in this repressive action. But this time, all her armaments didn’t help at all because they were confronted by a moral force whose only shield was one of rebellion against injustice. They encountered a people who will continue to show the world that “here no one will surrender.”

What came down this Thursday was a before and after situation. The Government of the rich knows that from now on, it will not be so easy to continue with the subjugation of rights and freedoms. This time those from the bottom showed the government a red card.

The United Colors of Benetton Include Blood Red in Argentina

In Argentina, the Supreme Court spurs national outrage with leniency for a ‘Dirty War’ criminal